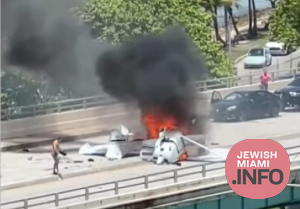 At least one person is dead and five others injured, when a small aircraft crashed onto a highway bridge and caught fire north of Miami Saturday afternoon, according to reports from local media.

The plane went down on the Haulover Inlet Bridge at the northern end of Biscayne Bay in Miami Dade County, near Bal Harbour, shortly before 1 p.m., according to Miami-Dade Fire Rescue.