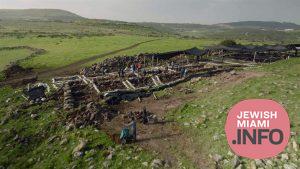 A well-preserved 2100-year-old, Hellenistic Hasmonean period agricultural farmstead, containing finds that may have been abandoned in haste, was uncovered at Horbat Assad next to Nahal Abel in Eastern Galilee.

Excavations carried out by the Israel Antiquities Authority prior to the Mekorot Company project to transfer desalinated water to the Kinneret, uncovered tens of loom weights used for weaving garments, large ceramic storage vessels, and iron agricultural implements, including various picks and scythes.

The coins retrieved date the farmstead to the second half of the second century BCE.

The excavation was financed with the assistance of Mekorot, in order to promote the NIS 910 million Northern Carrier project pursuant to a government resolution.

Its objective is to carry desalinated water to the basin in order to maintain the water level and anchor a continuous water supply for households, agriculture, and neighboring countries.

According to Dr. Amani Abu-Hamid, Director of the excavation on behalf of the Israel Antiquities Authority, “We were very lucky to discover a time-capsule, frozen in time, in which the finds remained where they were left by the occupants of the site, and it seems that they left in haste in face of an impending danger, possibly the threat of a military attack.

The weaving loom weights were still on the shelf, the storage jars were intact. We know from the historical sources, that in this period, the Judean Hasmonean Kingdom expanded into the Galilee, and it is possible that the farmstead was abandoned in the wake of these events. More research is required to determine the identity of the inhabitants of the site.”

In addition, the foundations of buildings, pottery vessels and other finds dating to the Iron Age, the 10-9th centuries BCE, were uncovered.

VP Development and Customers Department at Mekorot, Avi Malul: “Mekorot’s development work in coordination with the Israel Antiquities Authority is already in the general planning stage. The Antiquities Authority’s work at the site is for the strategic project for the transportation of surplus water from the desalination plants in central Israel to the north and Kinneret.”