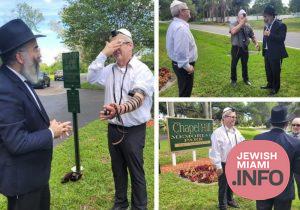 Can I be happy and sad at the same time? On Monday afternoon, I officiated at the funeral of a community member, Naomi Rosenberg. Though she relocated to Ellenton a few years ago, we fondly remember Naomi as being an active member of the community, participating and volunteering for many events and programs.

After the funeral service, Naomi’s two sons, Robert and David, came to thank me. They expressed their gratitude for the meaningful service, and spoke a little about their mom. I had always known that Naomi was the quintessential “Yiddish Mame”, Judaism being so important to her. The customs, holidays, foods and traditions were all treasured by her.

I asked Robert and David about their experience growing up- what was the degree of Judaism that they grew up with in Ohio? They answered that it was difficult. Anti-Semitism was always lurking beneath the surface, and it was difficult for them to stand out. Though their mom, Naomi, had registered them for Hebrew school, they were very uncomfortable attending. Most of the other students were from more comfortable and wealthy homes, and Robert and David didn’t feel like they “fit in”. As much as Naomi wanted it, the boys didn’t have much Jewish education, and didn’t have a Bar Mitzvah. It just wasn’t in the cards.

As I was speaking with her sons, right in the cemetery, I realized that all her life Naomi must have been pained that she wasn’t able to give over her love for Yiddishkeit, and to see her sons celebrating their Bar Mitzvah. What if we could give Naomi a gift, right now? Something she has always wanted but never had the Nachas of seeing? Can we have a Bar Mitzvah right here and now- outside the cemetery??

In the most incongruous place, by the cemetery gates, we celebrated a twin Bar Mitzvah. We exited the cemetery, did the ritual handwashing. Both Robert and David were eager to don tefillin, say the Shema and pray. With tears in our eyes, we sang “Siman Tov Umazal Tov”, knowing that on High, Naomi was smiling and clapping along with her two dear sons, and with the rest of us.

It would never occur to me to schedule a funeral & 2 Bar Mitzvahs in the span of one hour… but on Monday, Hashem “scheduled” if for me. When a Mitzvah opportunity knocks on the door, don’t ignore the call. Life’s journeys aren’t always according to our schedule, but they are divinely planned, and let’s take the mitzvah chances when they arrive at our doorstep.

A thought that resonated so deeply with me at this emotional Bar Mitzvah/funeral is that our hearts are so big, and there is space for 2 conflicting emotions at the same time. Sometimes while there is genuine sorrow in life, we might wonder how we can be joyous and happy. The wisdom of the Zohar sheds light: “Weeping is lodged in one side of my heart, and joy is lodged in the other side of my heart”.

Even while there is sadness, one should find a corner of their heart to plant seeds of joy, our heart is big enough for both to reside side by side.