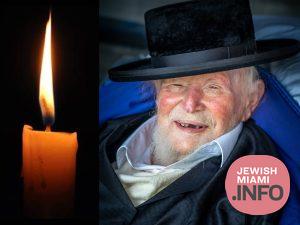 With great sadness we report the passing of Harav Pinchus Weberman OBM a famous Rov and Talmud Chochom who served the community of Miami Beach for over 54 years. He passed away on Wednesday, the 28th of Tammuz, 5782.

Rabbi Weberman founded the Ohev Shalom congregation of Miami Beach in 1960 before going on to lead the shul for over 54 years. He was also a chaplain well known chaplain in the Miami Beach Police.

He was also the founder and visionary of the Miami Beach Eruv Council.

The Levaya and burial will take place in Eretz Yisroel.

Shiva information to be announced.