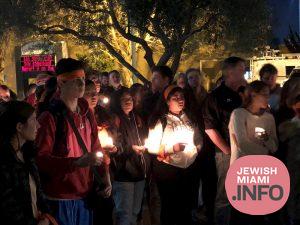 US President Joe Biden released a statement on the anniversary of the deadly school shooting in Parkland, Florida.

On February 14th, 2018, a gunman stole the lives of 14 students and 3 educators at Marjory Stoneman Douglas High School in Parkland, Florida. It was the deadliest high school shooting in a nation with far too many of them, and it left another community — and our country — shattered by grief.

On this difficult day, we mourn with the Parkland families whose lives were upended in an instant; who had to bury a piece of their soul deep in the earth. We pray too for those still grappling with wounds both visible and invisible. And, as we remember those lost in Parkland, we also stand with Americans in every corner of our country who have lost loved ones to gun violence or had their lives forever altered by a shooting, in tragedies that made headlines and in ones that did not.

Out of the heartbreak of Parkland a new generation of Americans all across the country marched for our lives and towards a better, safer America for us all. Together, this extraordinary movement is making sure that the voices of victims and survivors and responsible gun owners are louder than the voices of gun manufacturers and the National Rifle Association.

My Administration stands with those working to end this epidemic of gun violence. I have put forward a comprehensive plan to reduce gun crime that includes curbing the proliferation of “ghost” guns, cracking down on gun dealers who willfully violate the law, issuing model extreme risk protection order legislation for states, and promoting safe firearm storage, among other efforts. The Department of Justice is also helping more cities adopt smart law enforcement models like the one I recently saw in New York City, in which federal, state, and local law enforcement work together to share intelligence and remove shooters from our streets.

I’ve asked Congress to pass a budget that provides an additional half billion dollars for proven strategies we know reduce violent crime — accountable community policing and community violence interventions. I have also requested increased funding for the Bureau of Alcohol, Tobacco, Firearms and Explosives and the U.S. Marshals. And Congress must do much more — beginning with requiring background checks on all gun sales, banning assault weapons and high-capacity magazines, and eliminating immunity for gun manufacturers.