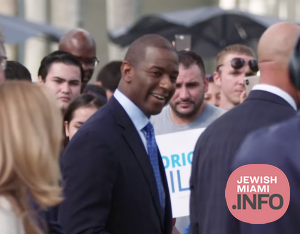 Former Florida Democratic gubernatorial hopeful Andrew Gillum, who was once caught in a hotel room with drugs and a male escort, has been hit with a 21-count federal indictment for fraudulent fundraising and other raps, officials said Wednesday.

Gillum, who narrowly lost to Florida Gov. Ron DeSantis in 2018, conspired with his mentor, Sharon Lettman-Hicks, to reroute campaign contributions for personal use, federal prosecutors said.

Lettman-Hicks, who was also indicted, helped to divert a portion of the donations to a company she controlled and masked the fraud by painting the funds as payroll payments to Gillum.