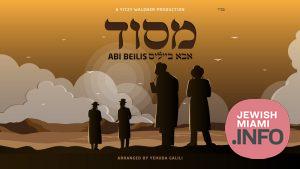 Singer and baal tefillah, Abi Beilis, has been singing and serving as a baal tefillah for the last seventeen years. He comes from a very musical family, with not one, but three musical sisters. Each of the three has had their hands in popular camp/school songs, production and dances over the last two decades and he has soaked up all that musicality.

Abi had a great uncle who was a chazzan for many years, who always imparted some tips for singing and davening, often giving Abi the upper hand. Beilis is also fortunate to daven in a chassidishe shul where there are many phenomenal Baalei Tefila on Yom Tov. He has learned much of his technique from them as well. His formal training, though, began at the age of twenty, when a musical friend recognized his talent and told him he needed to learn how to use it. That was how Abi’s longtime relationship with the famed Rabbi Avraham Aaron Weingarten, vocal coach and voice teacher to the stars began. Abi has been going to Rabbi Weingarten for seventeen years, and has been carefully honing his craft.

As a baal tefillah, Abi loves yomim noroim davening. The words of Misod Chachomim U’nevoinim always spoke to him. Remember where we came from, from the source of earlier tzaddikim who know how to converse properly with Hashem. Rabbi Weingarten and Abi discussed last year, how they wish there was a song that could convey the importance of the words and their meaning,  a little more than the typical nussach. Avraham Aaron started to play around with the words and hummed a tune. It wasn’t long before they had a full-fledged song. Interestingly enough, Rabbi Weingarten has another client who comes for voice lessons, famed composer, singer and producer Yitzy Waldner. The two spoke and it wasn’t long before Yitzy took on production of Weingarten’s song with Abi as the vocalist.

Presenting Abi Beilis in his debut song “Misod”, a moving song to help you prepare for Yom Hadin and bring you closer to speaking to Hashem. Like the verse says “Eftecho Pi”- help us open our mouth so our tefillos will be sweet and accepted by Hashem.

May we all merit a Shana Tova U’mesuka and the geula sheleima bekarov.