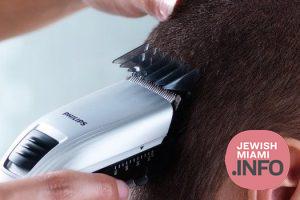 Is There Any Hair Cutting for Men Which is Allowed During the Three Weeks?

Increasingly, parents struggle with what type of haircut to give their three-year-old after their upsherenish: a traditional short cut leaving the region of the payos obviously longer, or, instead, what some consider to be “cute” bangs.

More frequently, young adults balk at the grooming regulations in the student handbook of their yeshivos. Many of them assume that the disallowance of a “tchup” (longer hair in front of the head) is arbitrary and is simply the preferred style of the school administration, rather than being based on any Torah-anchored reason or system. Even if they comply, many students feel resistance and even hostility to this restriction and seek to cast it away as early as they can.

In an effort to reduce the confusion regarding this issue, which has become common in contemporary communities (both Chassidic and non-Chassidic), a monograph has been published titled Halachic Ramifications of Hair Styles for Men (initially in Hebrew, with the hope that sponsors will enable an English translation).

Compiled by Rabbi Moshe Wiener (author of the sefer Hadras Ponim Zokon on the halachic perspective of the growth and cutting of the beard, as well as the sefer Kvuda Bas Melech on the laws of modesty in dress), this treatise identifies, documents and analyzes multiple halachic issues involved in growing the hairstyle known as a tchup, among them being:

·     → Growing one’s hair in the same manner as the gentiles is forbidden due to the issur of U’vechukoseihem lo seileichu—“Do not follow their statutes.” According to many Poskim, this includes growing a tchup.

·     → According to many Poskim, a tchup is considered a chatzitzah between one’s head and the tefillin shel rosh.

·     → Growing a tchup leads to arrogance and haughtiness, which are forbidden me’deoraysa.

·     → Growing a tchup can cause someone to stumble in additional issurim. We see this from the statement of Chazal that when one styles his hair, the yetzer hara says to him, “You are mine.”

·     → Some Poskim add that growing a tchup is also forbidden due to the issur of Lo yilbash gever simlas ishah—“A man may not wear the garments of a woman.”

·     → According to some commentators, R. Yehudah Hachassid’s admonition not to grow a tchup is also due to sakanah, danger.

·     → Growing a tchup may lead a person to comb it on Shabbos, which is an issur sekilah.

In additional chapters, this new publication demonstrates the severity with which Poskim view this prohibition, as evidenced by various restrictions some Poskim impose on a person with a tchup.

Additionally, due to the gravity of the issur, Poskim rule that a tchup may be removed even during periods when haircutting is normally forbidden, such as during Sefirah, the Three Weeks, on Rosh Chodesh, during Chol Hamoed, or during aveilus r”l.

Sefarim utilize extraordinary terminology to admonish parents against styling the hair of their sons with a tchup:

In fact, Poskim rule that if parents ask their son to grow a tchup, he does not need to listen to them (except in extreme cases, where the parents are not frum and failure to heed their wishes will affect the harmony in the home).

It is well known that despite the issurim involved, yeshiva bochurim in certain circles have grown accustomed to styling their hair with a tchup. This publication documents that some of the greatest Gedolim of the Litvish Yeshiva world (including such luminaries as the Chofetz Chaim and the Chazon Ish) were categorically opposed to this practice. In certain cases the roshei yeshiva did not actively oppose them, knowing that their words would remain unheeded, while in other cases the roshei yeshiva took a stronger stance and succeeded in eradicating this behavior. Needless to say, they voiced their displeasure whenever possible, often using surprisingly sharp language.

From a kabbalistic perspective, sefarim state that the powers of tumah cleave to hair that is grown long, and that styling one’s hair has a powerfully-damaging negative effect on the soul.