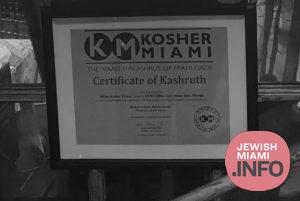 Kosher Sultan Express, an eastern cuisine restaurant in Sunny Isles is back under the certification of Miami Kosher.

In an announcement made Wednesday by Kosher Miami, the certifying agency announced the establishment’s recertification after it was dropped on July 6th.

“Please be advised that KM certification has been reinstated for Sultan Kosher Palace, located at 18250 Collins Avenue in Sunny Isles,” the announcement reads. “For exact time that they will be re-opening, please contact them directly at (305) 974-0545.”

Kosher Miami had initially rescinded its certification with explanation and had said that Sultan had planned on continuing to operate as a kosher establishment but without certification.

When previously contacted by JewishMiami.info, the Restaurant said that they planned to find another kosher certification.

The restaurant, which offers Kosher eastern cuisine boasts a variety on its menu, including soups, noodles, hot snacks, and dishes in the Kazan.