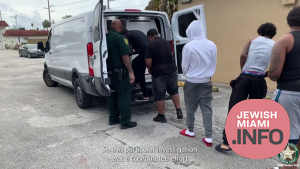 The Broward Sheriff’s Office Strategic Investigations Division (SID), working with a host of law enforcement partners in a multi-year investigation, has systematically dismantled a violent criminal street gang that sold drugs, committed crimes and instilled fear across the northern end of Broward County.

Detectives began the operation in 2017 after BSO detectives noticed an uptick in drug overdoses, fentanyl sales and gun violence in that area. Using various investigative techniques to build a racketeering case from the ground up, detectives targeted the Alwoods gang, a prolific group known to be operating since the 1990s. The gang sold drugs and committed violent crimes throughout northern Broward and southern Palm Beach counties. Detectives served dozens of search warrants, made two dozen arrests and seized a trove of evidence to take out the organization’s drug dealers, drug distributors and leadership.

Members of the organization are responsible for numerous criminal acts in Broward, Palm Beach and Miami-Dade counties, including drive-by shootings, robberies, burglaries and weapons violations. Members of the gang were involved in homicides with rival gangs, and at least three members of the gang are suspected of attempting to plan the murder of a rival gang member.

Throughout the operation detectives seized more than 40 kilos of cocaine, more than 20 kilos of heroin and fentanyl and thousands of pills. The investigation also resulted in the seizure of more than 70 guns and more than $800,000 in cash. Detectives also seized houses, cars, boats and about $1 million in gold and jewelry.

Overall, during the years-long investigation, approximately 70 gang members and associates of the gang were arrested. More than 100 additional people were arrested on various criminal charges connected to this operation.

“Violent drug gangs are a scourge on the community. Their illegal activities bring nothing but pain and suffering to neighborhoods and hard-working, law-abiding citizens,” Broward Sheriff Gregory Tony said. “BSO detectives and deputies, along with our outstanding law enforcement partners, worked long hours in dangerous situations to take down the members of this gang and make sure they remain where they belong – in jail.”

Florida Attorney General Ashley Moody said, “These gang members are connected to hundreds of cases—including violent crimes, drug trafficking and at least one fentanyl overdose death. Working with the Broward Sheriff’s Office and federal law enforcement agencies, my Statewide Prosecutors recovered more than $2 million in illicit proceeds, including cash and other assets. We also seized approximately 64 kilos of deadly fentanyl, heroin and cocaine. Now, the suspects in this massive, organized crime round up will have to face justice.”

The investigation into the Alwoods gang is ongoing.

Anyone with information on this criminal organization or crimes committed by the Alwoods gang are urged to contact Broward Crime Stoppers at 954-493-TIPS or online at browardcrimestoppers.org.