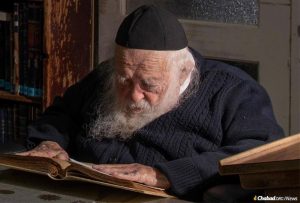 Automobile traffic was shut down in much of central Israel on March 20 as hundreds of thousands of mourners traveled from around the nation by bus and train to Bnei Brak as Rabbi Shmaryahu Yosef Chaim Kanievsky, one of the generation’s leading Lithuanian Torah scholars, was laid to rest. He passed away at his home in Bnei Brak on Shushan Purim (March 18). He was 94 years old.

Rabbi Kanievsky was born in 1928 to Rabbi Yaakov Yisrael and Rebbetzin Pesha Miriam Kanievsky in Pinsk, Poland, today Belarus. His parents met in 1925 after his father—born to a Chernobyl Chassidic family—authored his first work of Torah scholarship, Shaarei Tevunah (“Gates of Understanding”). Known as the Steipler Gaon after the city of Hornostaypel where he lived as a child, Rabbi Yaakov Yisrael married Miriam Karelitz, sister of Rabbi Avraham Yeshayahu Karelitz (known as the Chazon Ish) in 1926, and took up the lofty responsibilities as rosh yeshivah of the famed Novardok yeshivah, in Pinsk.

The Kanievsky family emigrated to the Holy Land in 1934, where the Steipler Gaon became a leading Torah authority and community leader.

From a very young age, Chaim—blessed with a photographic memory and humble spirit—was known as a child prodigy for his Torah insights and assiduous study.

In 1948, the 20-year-old rabbinical student at the Lomza Yeshivah in Petach Tikvah was drafted into the newly formed Israel Defense Forces and served near Jaffa during the War of Independence. Soon after, he married Batsheva Elyashiv, the eldest daughter of Jewish jurist Rabbi Yosef Shalom Elyashiv, who later achieved significant renown as a halachic authority.

While the young rabbi continued to learn in relative seclusion while authoring works of Torah scholarship, Rebbetzin Kanievsky became well-known for her spiritual gift of blessing, and even as the couple was raising their eight children, hundreds of people would flock to their home in Bnei Brak each week seeking her advice and blessing. More than 50,000 mourners attended her funeral in 2011.

Following his wife’s passing, Rabbi Kanievsky founded and became the rabbi and spiritual leader of Belev Echad, which became a leading nonprofit in Israel providing social services and medical equipment for sick and disabled children and adults. Until his health deteriorated after contracting Covid in 2020, he would receive thousands of visitors a year at his home, many of whom sought to ‘simply’ catch a glimpse of an old-style Torah scholar immersed in his ageless studies, while others sought a blessing from a Torah scholar. 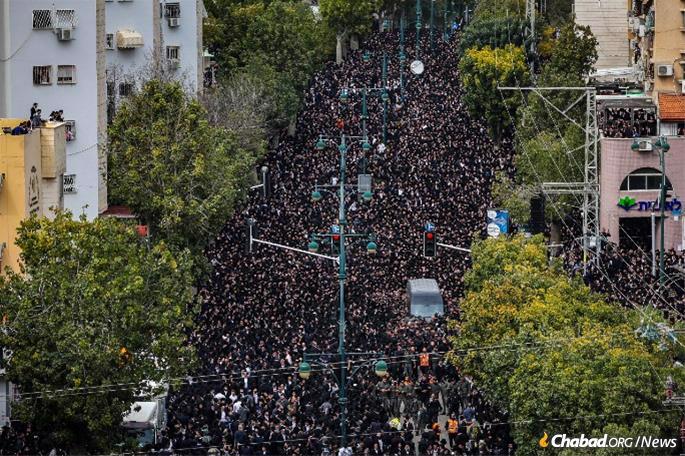 Hundreds of thousands of mourners traveled from around the country to attend Rabbi Kanievsky’s funeral.

Insights on a Variety of Torah Subjects

For most of his life, Rabbi Kanievsky declined to take on a public leadership role in the community, devoting himself instead to studying and writing on a wide range of often theoretical Talmudic topics of Torah scholarship.

Rabbi Kanievsky’s study regimen was very rare, as he reportedly spent up to 17 hours each day in study. He completed an incomprehensible amount of material each year, including the entire Tanach, the Babylonian Talmud, the Jerusalem Talmud, Maimonides’ Mishneh Torah, the Code of Jewish Law, Midrash, Zohar, Tosefta, and the writings of Rabbi Isaac Luria, known as the Ari.

This panoramic view of the fundamental works of halachah and kabbalah, some of which were significantly beyond the ‘curriculum’ of most heads of yeshivahs, granted him expertise in large swaths of the Torah’s corpus. His written works reflect this breadth of knowledge and cover some of the more obscure areas of Jewish law, such as laws particular to the Land of Israel, the Temple, and the sacrifices.

Studying these areas also brought him face to face with some of the themes that the Rebbe, Rabbi Menachem M. Schneerson, of righteous memory, had delved into years earlier. In this vein, he weighed into the debate regarding the shape of the branches of the Menorah in the Temple. In line with the Rebbe’s deductions from Rashi’s commentary and Maimonides’ famous illustration, he, too, concluded that the branches of the Temple Menorah were straight rather than curved.

He similarly researched and came to agree with the Rebbe’s approach to matters like the superiority of wigs vs. kerchiefs as head-coverings for married women; and the centrality of Maimonides’ code, known as Mishneh Torah, to the entirety of Judaism.

Unlike the Shulchan Aruch of Rabbi Yosef Karo which does not codify laws that are inapplicable today, Maimonides covers the entirety of Jewish Law. Rabbi Kanievsky wrote an extensive commentary on the various sections of Mishneh Torah which pertain to areas of Jewish law not covered by the Shulchan Aruch and its commentaries.

Rabbi Kanievsky would actively support the daily study of Rambam as per the Rebbe’s guidance. He also deeply appreciated the work of Chabad scholars who had expanded on the Biblical and Talmudic sources for all of the laws cited by Maimonides. He similarly called for the public to learn the Shulchan Aruch Harav of the Alter Rebbe, Rabbi Shneur Zalman of Liadi.

Perhaps most attesting to his proficiency in Rambam (Maimonides) is a 1967 letter from the Rebbe’s secretariat to Rabbi Azriel Zelig Slonim in Jerusalem asking him to obtain a number of works for the Rebbe’s library, including Rabbi Kanievsky’s Kiryat Melech on Maimonides’ Mishneh Torah.

For decades, Rabbi Kanievsky studied and wrote in relative solitude. But following the death of the leading Lithuanian rabbi, Rabbi Aharon Leib Shteinman, in 2017 and countless subsequent requests that he try to fill the void, he began providing public guidance on some issues of the day.

But even as he attempted to remain outside the public eye, Rabbi Kanievsky assisted many individuals from all walks of Jewish life.

Chabad-Lubavitch Rabbi Avraham Berkowitz related how in 1972, his mother-in-law and her family were able to immigrate from Kharkov, Ukraine, then part of the USSR, thanks to the direct help of Rabbi Kanievsky. They needed a family member in Israel who would send an invitation letter to Soviet authorities in Russia in order for them to emigrate.

“My mother-in-law’s family name is Kanevsky, and they did not have family in Israel,” said Berkowitz. “Rabbi Yaakov Kanievsky signed the invitation letter. He instructed his son, Rabbi Chaim Kanievsky, to facilitate the immigration process.

“In New York, the Rebbe was actively involved in the entire process,” Berkowitz continued. “The Rebbe instructed the family to visit Rabbi Kanevsky as soon as they arrived in Israel to thank him for helping them leave the USSR.”

They went straight from the airport to visit Rabbi Kanievsky in Bnei Brak and expressed their deepest appreciation to their newfound “family” member, Rabbi Chaim Kanievsky.

This article has been reprinted with permission from chabad.org