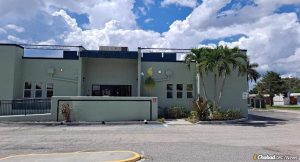 In Port Charlotte and Punta Gorda, Fla., you’ll find the roofs of homes strewn along the streets, cars tossed around like toys and fallen trees perched on houses and power lines. Six days after the storm, power is still out almost everywhere; cellphone coverage is scarce; and running water is not a given. Hurricane Ian ravaged the county with winds of 145 mph, and then followed with a storm surge and flood waters up to 6 feet high.

But step into the area’s Chabad House, and you’ll find crowds of locals enjoying hot meals, cooling down in the air-conditioning, charging their phones and chatting.

“We miraculously kept power throughout the storm,” explains Rabbi Simon Jacobson, who directs Chabad of Charlotte County with his wife, Sheina. “So we became a point for people in the community, Jewish and non-Jewish alike. It’s not just the food and water, it’s hard to explain how necessary power tools are right now, and those batteries need to be recharged often.”

Having a powered Chabad House in the aftermath of the storm is making rescue efforts and emergency assistance immensely far easier than it would have been otherwise—and the community isn’t taking that for granted, especially since Chabad of Charlotte County moved into the building just a few days before Rosh Hashanah, which preceded the hurricane by less than a day.

The first big event at the new center was on Rosh Hashanah. In the days leading up to the holiday, the community wasn’t overly concerned about Hurricane Ian, as forecasts didn’t expect it to hit their area. That changed rather quickly.

“The first night and day of Rosh Hashanah were beautiful,” recalled Sheina Jacobson. “People were already starting to become scared of the hurricane, so the crowd wasn’t as big as we expected, but there were about 50 to 60 people, and it was beautiful.”

On the second day of Rosh Hashanah, barely anyone showed up at all. Being disconnected from electricity in observance of the holiday, the few in attendance didn’t quite understand why.

“An official came in the middle of services, and told us that we’re in the red zone and need to evacuate. We asked if we needed to evacuate immediately or had time before it arrived, and they told us we had until early the next morning.”

Leaping Into Service After the Storm

They found the brand-new Chabad House still connected to power but not without some damage from the storm. The main carpet had been flooded and a kitchen window completely shattered, which allowed the wind free reign to pull down the ceiling in the building’s kitchen and connected hallway. Outside, trees and debris were strewn about, and the building exterior experienced light damage.

None of that stopped the Jacobsons from welcoming locals into the building and offering everyone assistance.

While meals are being served and delivered, the Jacobsons’ phones continue to ring with both requests and messages of gratitude. The requests for help are rarely from community members themselves; most don’t have access to communication. Instead, anxious relatives from out of town call, asking the couple to please find their parents, siblings or children they haven’t heard from since before the storm.

“Blessings for your help. I am so relieved. Tears of joy,” one woman wrote after Rabbi Jacobson brought her parents to safety. “Please continue your outreach to those who are suffering during the aftermath of Hurricane Ian.”

The Jacobsons have a database of community members and their locations, along with new additions that relatives have called in for. They work together with Hatzalah volunteers, volunteers from their own community and the sheriff’s office to make sure everyone is accounted for and safe.

“One elderly couple lived on a small island that was accessible by bridge,” Rabbi Jacobson related. “Hurricane Ian completely destroyed the bridge and flooded the island. They had no way out. We got to them by boat.”

Another elderly community member had Sheina Jacobson worried when they still hadn’t heard from him two days after the storm. It was already Shabbat and with no other way to reach him, the community chazzan, Shmuel Jacobson, along with two volunteers, set out on a three-hour walk to his apartment. The trio were the man’s first contact post-hurricane, the visit meant the world to him.

This is the community’s third Chabad House building. The very first was also established with a Hurricane—Hurricane Charley in 2004. In that instance, the Jacobsons were new in town and took a look at a much sought-after two-bedroom home for sale that could potentially house both their family and the new Chabad House. The day after they looked at the home, Charley hit as a Category 4 hurricane, and destroyed the entire neighborhood. The only home that was not damaged was the one they had looked at.

Shaken by the experience, the owner of the house decided to sell only to the new Chabad couple.

After growing out of the in-home Chabad House, the Jacobsons began renting a storefront, where they held services and activities for nine years before purchasing the new 9,500 square foot building just a couple weeks ago. This new building would also host a preschool and allow room for expanding communal activities.

“We’re working on raising funds for community members whose homes suffered extreme damage, to help them recover from the mess. We also need to prepare for the community’s holiday needs for Yom Kippur and then Sukkot. Then we can focus on covering the insurance deductibles for the building repairs and build back stronger.”

Despite all the challenges, Rabbi Jacobson makes it a point to say that “we’re just grateful for this miracle that we can help our community during this Hurricane recovery.”

Or as one local wrote: “We’re so glad that you’ve come to the neighborhood.”

Donations to Chabad of Charlotte County relief efforts can be made here.