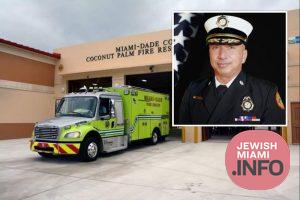 Mayor Daniella Levine Cava made the official announcement last week. Chief Jadallah has been serving the Department as the Deputy Fire Chief of Emergency Operations since 2021.

Chief Jadallah is a dedicated and distinguished leader with over 26 years of experience in public service. Since joining MDFR in 2000, he has had a prominent career with MDFR and has had the distinct honor to serve in the fire service in the promotional ranks of fire lieutenant, fire captain, chief fire officer, assistant fire chief, and deputy fire chief. He has dedicated his life to the fire-rescue service and pledges to continue to deliver responsive, professional, and humanitarian emergency fire-rescue services to all Miami-Dade County residents and visitors.

“I’m humbled to have been chosen to lead this great department, which I’ve been part of for most of my career,” said MDFR Fire Chief Raied Jadallah. “Being a public servant has brought great meaning and joy to my life, and I look forward to leading the men and women of Miami-Dade Fire Rescue for years to come.”

As fire chief, Chief Jadallah will lead the sixth-largest accredited full-service fire and rescue department in the southeastern United States. Originally operating as a single-unit fire patrol in 1935, MDFR is responsible for dispatching resources over an area of approximately 1,883 square miles that includes over 71 fire stations responding to all of the unincorporated areas of Miami-Dade County and 29 municipalities within the County. MDFR is currently staffed by almost 2,800 employees, including over 2,200 uniformed firefighters who are trained in both fire suppression and emergency medical response.

As the Deputy Fire Chief of Emergency Operations, Chief Jadallah oversaw 2,100 MDFR employees who provided vital services such as fire suppression, medical rescue services, and emergency services to the residents and visitors of Miami-Dade County. Additionally, he oversaw the Office of Emergency Management, supporting the community’s disaster preparedness, response, recovery, and mitigation needs through the coordination of information and resources countywide.

Chief Jadallah had also been tasked as the Department’s Incident Commander for COVID-19 since March 2020. As the COVID-19 Incident Commander, he put together a team that established and coordinated a department response plan utilized throughout MDFR and other Miami-Dade County departments. Additionally, he has been assigned to various incident management team positions, including incident commander, for several of MDFR’s emergency incidents and pre-planned events, including Super Bowl LIV, hurricanes, the FIU bridge collapse, the Doral parking garage collapse, and the Shuckers deck collapse. In addition, Chief Jadallah oversaw one of the most significant complex incidents in Miami-Dade County’s history, the Champlain Towers South building collapse in Surfside, FL.