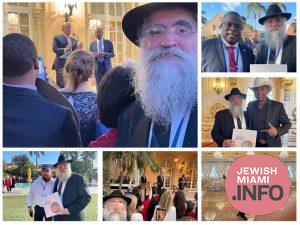 At a Private Reception with Donald J. Trump at The Mar-A-Lago Club in Palm Beach Florida, the former president spoke about his tremendous support for Israel with regard to the Iran Nuclear Deal and asked Rabbi Yitzchok Minkowicz if he had any questions. Rabbi Minkowicz responded that he would like to give the former President a Gift of Shmura Matza.

Said “You Look Innocent” Trump instructed the Secret Service to accept the gift on his behalf and thanked Rabbi Minkowicz publicly for the gift.

Shliach Rabbi Yitzchok Minkowicz shared the significance of Shmura Matza with John Gibbs and Cofey Anderson as well as many others at the event.

When sharing the significance with the famous Neurosurgeon Dr. Ben Carson, he remarked that the Shmura Matza actually looks similar to the human brain.

The Matzah presented was a gift from the Gurevitch family in loving memory of Rabbi Chaim Gurevitch who was passionate on giving out Shmura Matzah before Pesach. May Reb Chaim’s soul be elevated by continuing this beautiful Mitzvah in his Memory.