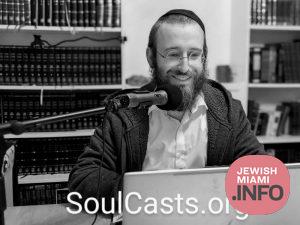 SoulCasts.org from Rabbi Josh Zebberman of Chabad of the Tri-Valley presents a series of Short Haggadah Bites for your Seder Table.

The first 3 letters of כהן לוי ישראל spells כלי – vessel. Matza which is traditionally the “bread of faith” inspires us to be an open vessel to something larger than our own selves.

Alternatively, the first 3 letters of ישראל לוי כהן in the reverse order spells ילך progress. We must not just be open to faith, we must actively progress in our faith.

Why would we invite people to partake in the seder at this point when we already began rather than make this proclamation earlier at Shul?

In the event that we have guests that are less financially fortunate, we announce that we are all equally partaking in the “poor man’s bread” that our ancestors ate.

This serves as a reminder that freedom is not solely defined by our geographical location (“in the land of Israel”), we also need to be internally “free people”.
(Toras Menachem 1962)

Let’s not lose sight of our goal; the purpose of the invitation for “Anyone who is famished should come and eat” is so they can “ partake of the Pesach sacrifice”.

4. Appreciate the Good in Life

In truth we also dip twice on the evening of Rosh Hashanah; We dip the challah into the honey and then the apple into the honey!?

However, when life is sweet like honey it is natural to not ask questions and appreciate the source, when life is bitter we tend to ask why. This serves as a reminder to recognise that everything is from Hashem.

5. Living a life of substance

On [all] other nights, we eat either sitting or reclining; tonight we all recline.

Night can euphemistically refer to exile. What makes this “night” – dark exile different from all others?

The word מְסֻבִּין – recline can also be read as מְ-סֻבִּין “from husks”.
During this exile we tend to be superficial, like the husks of grain (klipa), thus neglecting the grain itself, what truly matters in life.

How would we still be enslaved to Pharaoh were G-d not to redeem us; a) Pharaoh would not have been alive today, and b) the redemption was predetermined by G-d and promised to Avraham?

Were G-d not to redeem us, but rather Paroha redeemed us, we would have forever felt indebted to him. Give credit where credit is due.

It happened once [on Pesach] that Rabbi Eliezer, Rabbi Yehoshua, Rabbi Elazar ben Azariah, Rabbi Akiva and Rabbi Tarfon were reclining in Bnei Brak and were telling the story of the exodus from Egypt that whole night, until their students came and said to them, “The time of [reciting] the morning Shema has arrived.”

Why would these students assume that their Rabbis, who were prominent sages, would not be conscientious of when the Shema needs to be recited?

As a reaction, their students declared, “The time of [reciting] the morning Shema has arrived!”, as if to say, now we can recite the Shema and declare G-d’s sovereignty genuinely!

8. Answer the Person, Not Just the Question

Corresponding to four sons did the Torah speak; one [who is] wise, one [who is] evil, one who is innocent and one who doesn’t know to ask.

Each child gets their individualized response. While the Torah does communicate the same values to each child, the response is tailored.
In addition to focusing on answering questions, we must give attention to whom we are answering.

9. Don’t let Your Questions Stop You

What does the wise [son] say? “‘What are these testimonies, statutes and judgments that the Lord our God commanded you?’ (Deuteronomy 6:20)” And accordingly you will say to him, as per the laws of the Pesach sacrifice, “We may not eat an afikoman [a dessert or other foods eaten after the meal] after [we are finished eating] the Pesach sacrifice

The wise son asks about the various types of Mitzvos; testimonial laws, statutes, and civil law, yet his question is not addressed. He is just instructed to follow the laws of the Pesach sacrifice.

Rabbi Shimon Sofer relays how in his youth he had questions relating to his faith that planted disturbing doubt in his mind. He came to his father Rabbi Moshe Sofer (known as the famed Chasam Sofer of Pressburg) and desperately conveyed his questions and concerns.

Rabbi Moshe Sofer listened to his son, but did not respond. Several days later He summoned his son and gave an explanation that clarified everything, not only answering the question, but deeming it irrelevant.

Rabbi Moshe Sofer explained to his son that he was trying to impart to him a powerful lesson; have faith that even the most difficult questions have answers, even if you aren’t yet aware of it.

What does the wicked [son] say? “‘What is this worship to you?’ (Exodus 12:26)” ‘To you’ and not ‘to him.’ And since he excluded himself from the collective, he denied a principle [of the Jewish faith]

What did the wicked son ask that was so wrong?

He is so caught up debating the details of Jewish practice and commandments and neglected the commander – G-d. He missed the point.

How is it appropriate or effective to blunt his teeth?

There’s an entire discussion in the Talmud (Shabbos, Perek HaBoneh) about the significance of the Hebrew letters, their shapes,a nd juxtapositions. The Talmud there explains that the letter ש (shin) stands for שקר – lies.

The Hebrew term here used for “his teeth” is שִׁנָּיו which can also be understood as “his (letter) shin” , which stands for שקר – lies. We are instructed to hit the wicked person’s שקר – lies, which are causing him confusion.

Accordingly, the Talmud (Sota) says that a person would only sin if they were overcome by a delusional spirit.

What is the “this” that has “stood for our ancestors and us” referring to?

In the Arizal’s nusach of the Haggadah, the instructions “Lift up the cup” appear right before this paragraph.

The Hebrew word for cup – כוס has the same numerical value as the word הטבע – nature. כוס can also mean “cover”.

When we lift up our nature, as signified by the cup, which tends to cover up our true strengths and values, “this is what stood for our ancestors and us”.

“As a small number” – as it is stated (Deuteronomy 10:22), “With seventy souls did your ancestors come down to Egypt, and now the Lord your God has made you as numerous as the stars of the sky.”

The Hebrew term used for “With seventy souls…” – בְּשִׁבְעִים נֶפֶשׁ which literally translates as “soul” in the singular form. As if to say that when we went down to Egypt, we were united as one.

14. When it Comes to Punishments, Keep ‘em Short and Sweet

Rabbi Yehuda did not want to spend too much time articulating speech in relation to punishment and negativity, so he made an acronym to shorten it.