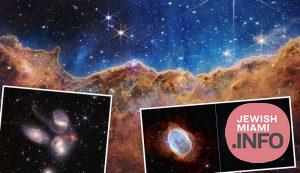 This landscape of “mountains” and “valleys” speckled with glittering stars is actually the edge of a nearby, young, star-forming region called NGC 3324 in the Carina Nebula. Captured in infrared light by NASA’s new James Webb Space Telescope, this image reveals for the first time previously invisible areas of star birth.

Called the Cosmic Cliffs, Webb’s seemingly three-dimensional picture looks like craggy mountains on a moonlit evening. In reality, it is the edge of the giant, gaseous cavity within NGC 3324, and the tallest “peaks” in this image are about 7 light-years high. The cavernous area has been carved from the nebula by the intense ultraviolet radiation and stellar winds from extremely massive, hot, young stars located in the center of the bubble, above the area shown in this image.

The blistering, ultraviolet radiation from the young stars is sculpting the nebula’s wall by slowly eroding it away. Dramatic pillars tower above the glowing wall of gas, resisting this radiation. The “steam” that appears to rise from the celestial “mountains” is actually hot, ionized gas and hot dust streaming away from the nebula due to the relentless radiation.

Webb reveals emerging stellar nurseries and individual stars that are completely hidden in visible-light pictures. Because of Webb’s sensitivity to infrared light, it can peer through cosmic dust to see these objects. Protostellar jets, which emerge clearly in this image, shoot out from some of these young stars. The youngest sources appear as red dots in the dark, dusty region of the cloud. Objects in the earliest, rapid phases of star formation are difficult to capture, but Webb’s extreme sensitivity, spatial resolution, and imaging capability can chronicle these elusive events.

These observations of NGC 3324 will shed light on the process of star formation. Star birth propagates over time, triggered by the expansion of the eroding cavity. As the bright, ionized rim moves into the nebula, it slowly pushes into the gas and dust. If the rim encounters any unstable material, the increased pressure will trigger the material to collapse and form new stars.

Conversely, this type of disturbance may also prevent star formation as the star-making material is eroded away. This is a very delicate balance between sparking star formation and stopping it. Webb will address some of the great, open questions of modern astrophysics: What determines the number of stars that form in a certain region? Why do stars form with a certain mass?

Webb will also reveal the impact of star formation on the evolution of gigantic clouds of gas and dust. While the effect of massive stars – with their violent winds and high energy – is often apparent, less is known about the influence of the more numerous low-mass stars. As they form, these smaller stars create narrow, opposing jets seen here, which can inject a lot of momentum and energy into the clouds. This reduces the fraction of nebular material that seeds new stars.

Up to this point, scientists have had very little data about the influence of the multitude of young and more energetic low-mass stars. With Webb, they will be able to obtain a full census of their number and impact throughout the nebula.

Stephan’s Quintet, a visual grouping of five galaxies, is best known for being prominently featured in the holiday classic film, “It’s a Wonderful Life.” Today, NASA’s James Webb Space Telescope reveals Stephan’s Quintet in a new light. This enormous mosaic is Webb’s largest image to date, covering about one-fifth of the Moon’s diameter. It contains over 150 million pixels and is constructed from almost 1,000 separate image files. The information from Webb provides new insights into how galactic interactions may have driven galaxy evolution in the early universe.

With its powerful, infrared vision and extremely high spatial resolution, Webb shows never-before-seen details in this galaxy group. Sparkling clusters of millions of young stars and starburst regions of fresh star birth grace the image. Sweeping tails of gas, dust and stars are being pulled from several of the galaxies due to gravitational interactions. Most dramatically, Webb captures huge shock waves as one of the galaxies, NGC 7318B, smashes through the cluster.

Together, the five galaxies of Stephan’s Quintet are also known as the Hickson Compact Group 92 (HCG 92). Although called a “quintet,” only four of the galaxies are truly close together and caught up in a cosmic dance. The fifth and leftmost galaxy, called NGC 7320, is well in the foreground compared with the other four. NGC 7320 resides 40 million light-years from Earth, while the other four galaxies (NGC 7317, NGC 7318A, NGC 7318B, and NGC 7319) are about 290 million light-years away. This is still fairly close in cosmic terms, compared with more distant galaxies billions of light-years away. Studying such relatively nearby galaxies like these helps scientists better understand structures seen in a much more distant universe.

This proximity provides astronomers a ringside seat for witnessing the merging and interactions between galaxies that are so crucial to all of galaxy evolution. Rarely do scientists see in so much detail how interacting galaxies trigger star formation in each other, and how the gas in these galaxies is being disturbed. Stephan’s Quintet is a fantastic “laboratory” for studying these processes fundamental to all galaxies.

Tight groups like this may have been more common in the early universe when their superheated, infalling material may have fueled very energetic black holes called quasars. Even today, the topmost galaxy in the group – NGC 7319 – harbors an active galactic nucleus, a supermassive black hole 24 million times the mass of the Sun. It is actively pulling in material and puts out light energy equivalent to 40 billion Suns.

Webb studied the active galactic nucleus in great detail with the Near-Infrared Spectrograph (NIRSpec) and Mid-Infrared Instrument (MIRI). These instruments’ integral field units (IFUs) – which are a combination of a camera and spectrograph – provided the Webb team with a “data cube,” or collection of images of the galactic core’s spectral features.

Much like medical magnetic resonance imaging (MRI), the IFUs allow scientists to “slice and dice” the information into many images for detailed study. Webb pierced through the shroud of dust surrounding the nucleus to reveal hot gas near the active black hole and measure the velocity of bright outflows. The telescope saw these outflows driven by the black hole in a level of detail never seen before.

In NGC 7320, the leftmost and closest galaxy in the visual grouping, Webb was able to resolve individual stars and even the galaxy’s bright core.

As a bonus, Webb revealed a vast sea of thousands of distant background galaxies reminiscent of Hubble’s Deep Fields.

Some stars save the best for last.

The dimmer star at the center of this scene has been sending out rings of gas and dust for thousands of years in all directions, and NASA’s James Webb Space Telescope has revealed for the first time that this star is cloaked in dust.

Two cameras aboard Webb captured the latest image of this planetary nebula, cataloged as NGC 3132, and known informally as the Southern Ring Nebula. It is approximately 2,500 light-years away.

Webb will allow astronomers to dig into many more specifics about planetary nebulae like this one – clouds of gas and dust expelled by dying stars. Understanding which molecules are present, and where they lie throughout the shells of gas and dust will help researchers refine their knowledge of these objects.

This observation shows the Southern Ring Nebula almost face-on, but if we could rotate it to view it edge-on, its three-dimensional shape would more clearly look like two bowls placed together at the bottom, opening away from one another with a large hole at the center.

Two stars, which are locked in a tight orbit, shape the local landscape. Webb’s infrared images feature new details in this complex system. The stars – and their layers of light – are prominent in the image from Webb’s Near-Infrared Camera (NIRCam) on the left, while the image from Webb’s Mid-Infrared Instrument (MIRI) on the right shows for the first time that the second star is surrounded by dust. The brighter star is in an earlier stage of its stellar evolution and will probably eject its own planetary nebula in the future.

In the meantime, the brighter star influences the nebula’s appearance. As the pair continues to orbit one another, they “stir the pot” of gas and dust, causing asymmetrical patterns.

Each shell represents an episode where the fainter star lost some of its mass. The widest shells of gas toward the outer areas of the image were ejected earlier. Those closest to the star are the most recent. Tracing these ejections allows researchers to look into the history of the system.