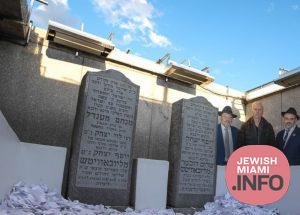 Cambria Heights, NY – Mayor Charles Burkett of Surfside, Florida, this week visited the Ohel, the resting place of the Lubavitcher Rebbe, to pay tribute to victims of the June, 2021 Surfside building collapse disaster, and to meet privately with family members of the victims.

For the past eight months, victims’ families have been trying to recover, attempting to make sense of the disaster, whose cause is under investigation. Mayor Burkett and the city of Surfside have been greatly supportive and have provided access to resources to help alleviate their pain.

Mayor Burkett announced that he and his commissioners have approved the transfer of a parcel of land adjacent to the disaster site, and a plan for a Surfside memorial paying tribute to victims of the tragedy. “We are collaborating with the families and with the New York 9/11 Memorial’s President, Monica Iken, who has experience in such matters, to build an everlasting memorial in Surfside for the families who lost loved ones in Surfside,” said the mayor.

The mayor was met at the Ohel by a delegation headed by Chaplain Mendy Coën, director-general of the United States Chaplain Corps (USCC), who provided spiritual care to families, rescuers, and first responders following the disaster. Mayor Burkett thanked the USCC for its remarkable work and support.