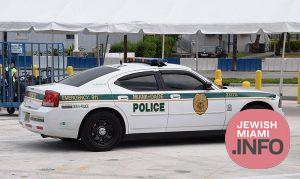 A traffic stop went sideways this past week in Miami-Dade, sending a teen to the hospital with gunshot wounds.

According to the police, officers had attempted to conduct a traffic stop in the area of Northwest 55th Street and 22nd Avenue around 12:45 a.m., Sunday, when the driver refused to pull over and ended up crashing his car.

the driver, Vito Corleone-Venisee, 15, bailed from the crashed vehicle along with multiple other occupants who scattered in different directions.

The officer, identified as a Miami-Dade Seargeant, pursued Corleone-Venisee, and after discovering that the teen was armed, opened fire.

“There was an assault rifle inside of the vehicle as well,” said Miami-Dade Police Department Detective Alvaro Zabaleta. “Tonight could have very easily been a tragic night for law enforcement family, as these individuals were driving around for one, a 15-year-old driving a car, and secondly, a 15-year-old armed with a handgun. An assault rifle inside of that vehicle, wanted for possession of firearms. These are individuals that clearly are up to no good.”

Struck by the officers gunfire, the teen was transported to Jackson Memorial Hospital Ryder Trauma Center in critical condition.

The incident remains under investigation.