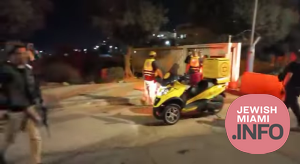 One person has been confirmed dead and five injured in a terror attack in attack in Kiryat Arba Motzei Shabbos. The Terrorist was neutralized.

According to reports, the shooting took place outside the home of far right MK Itamar Ben-Gvir, with a 60-year-old man being shot and killed.

Devorah Aviad, a United Hatzalah paramedic who was at the scene, relayed: “When I arrived at the scene I found several wounded with various degrees of injuries. Together with other medical personnel, we treated all of the injured, who were then transported to the hospital for further treatment.”