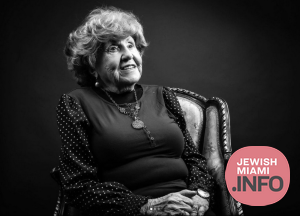 Ettel was born in Kosice, Czechoslovakia in 1927.

She described life as “very good”, being one of nine children in a poor family.

Her father was a sought after Rabbi, and her paternal grandfather, Rabbi Yankel Frankfurter, was a big Rebbe, who people flocked to to get his advice and blessings.

Shortly after Pesach, Ettel and her family were deported via cattle cars to Auschwitz.

In that historical journey, her father was reminding them “We must say Tefillas Haderech on the train.”

“Little did he or any of us know at that point what was about to happen. I never forget the sound of those starving, thirsty babies screaming until they came to a deathly stop.”

Once they arrived, Ettel’s parents and younger siblings were sent to the left, all brutally murdered together at the infamous gas-chambers.

Ettel was sent to the right with her 2 older sisters who were with her during their time in Auschwitz, The Death March, and Bergen Belsen.

Ettel is believed to be of the last witnesses to remember Anne Frank on a Death March, and Anne’s death in Bergen Belsen.

The British liberated Ettel in 1945. “I was one of those that G-d had decided to let live.”

And live she did. From Sweden, to Paris, to Israel in 1948, where a mutual relative suggested Ettel for her grandson – Yitzchok Flam who was from Montreal, Canada.

The two met and felt an instant connection. Whereupon they got married. Her husband was a Rabbi in Virginia, and in Linden, New Jersey.

Once the Flams had four children, they needed to think of the chinuch for them, so we moved to the hub of Jewish life at the time: Brooklyn, Williamsburg, Crown Heights, and then Boro Park. Yitzchok switched careers to become a textile business owner. Sadly, he passed away before his time.

In 2018, Ettel and other survivors visited the White House invited by President Donald Trump.

Ettel lives in Boro Park, doted on by her children, her 19 grandchildren and an ever growing number of great-grandchildren.