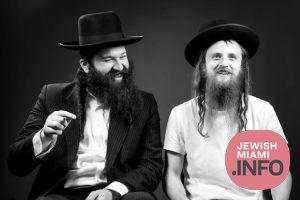 Zusha is an American Hasidic folk/soul band from New York. They formed in 2013 with lead singer Shlomo Gaisin and guitarist Zachariah Goldschmiedt. The band, named after Zusha of Hanipol, combines traditional Hasidic niggunim with secular styles like jazz, folk, and reggae. Their self-titled debut EP, released on October 28, 2014, reached No. 9 on Billboard’s World Albums chart, while their debut full-length album, Kavana (2016), reached No. 2.

Since taking the scene by storm, Zusha has earned themselves a special place in the heart of their growing audience, touring their music around the world, and sharing the stage with many popular Jewish artists.

The band is often associated with the Hasidic hipster and neo-Hasidism movements, although they have debated the latter term, arguing that they are merely rediscovering Hasidism rather than reinventing it.

They have also rejected the label of being “Jewish music”, with saying, “The music is deeper than religion. It’s deeper than a faith. I’m Jewish, but I’m a person. Let’s start from there.”