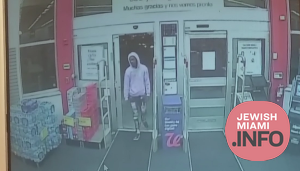 Toothbrush Bandits Sought After Lifting Over $1,000 in Electric Toothbrushes From A Single Store

Broward Sheriff’s Office Tamarac district detectives are seeking the public’s help in locating four subjects who have stolen more than a thousand dollars’ worth in electric toothbrushes from the same store in Tamarac.

At approximately 5:56 p.m., on Thursday, Dec. 16, BSO district deputies responded to a store near the 3900 block of West Commercial Boulevard in Tamarac after receiving a report that two subjects stole several electric toothbrushes.

According to investigators, two similar incidents occurred on Sept. 12 and Nov. 22 at the same location. Detectives say their modus operandi is always the same: two subjects walk into the store, proceed to the dental care area, grab several electric toothbrushes, and quickly leave. The main subject brought a different partner each time they shoplifted from the store.

Anyone with information regarding the identity of these subjects can contact BSO Tamarac Detective E. Jonnalus at 954-720-2225. If you wish to remain anonymous, contact Broward Crime Stoppers at 954-493-TIPS (8477) or online at browardcrimestoppers.org.