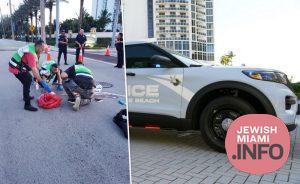 A Jewish woman has sadly passed away after being struck while crossing Collins Ave in Sunny Isles Beach Monday.

According to reports, Sunny Isles Beach Police and Miami-Dade Fire Rescue units responded to the scene in the area of 159th Street and Collins Avenue just before 4:30pm for reports that a person had been struck by a vehicle.

The woman was treated by Miami-Dade Fire Rescue but was pronounced deceased soon after.

The street was shut down for hours as an investigation was made.

Update: The deceased has been identified as 54-year-old Margot Solomon OBM, a resident of Miami.