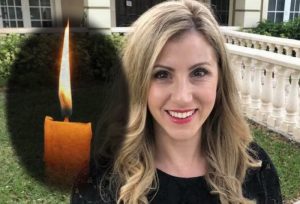 Shock and disbelief struck Chabad of Parkland when one of their congregants was murdered in what is believed to be a case of mistaken identity.

Sara-Michelle Trost, a 40-year-old wife and mother and active member of the Chabad House of Parkland in South Florida, was at her work this past Thursday showing apartments in her role as a Real Estate Agent when she was shot multiple times in her car.

According to the police, the shooting stemmed from a landlord tenant dispute where the tenant had been evicted from his home. The tenant, out for revenge, found Trost, and believing her to the the landlord, shot her multiple times.

Rabbi Biston of Chabad of Parkland said Trost had “unparalleled energy,” with a smile and laugh that would light up a room.

Sara was a British native who had moved to South Florida and grew her own business as a Real Estate Agent.