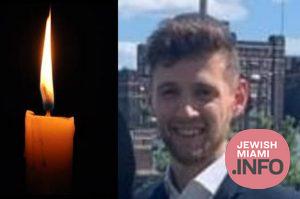 Tragedy has struck the Baltimore Jewish community with the news that a young husband and father was murdered while working at Washington DC.

Detectives from the Metropolitan Police Department’s Homicide Branch are investigating the murder that occurred on Wednesday, August 10, 2022, in the 5100 block of Call Place, Southeast.

At approximately 3:41pm, members of the Sixth District Police responded to a report of a shooting. When they arrived, the officers found 25-year-old Aryeh Wolf HY”D suffering from an apparent gunshot wound. DC Fire and Emergency Medical Services responded to the scene and transported him to an area hospital where after all life-saving efforts, he was pronounced deceased.

Aryeh Wolf, a resident of Baltimore, had been at work when the incident took place. He leaves behind a wife and 6-month-old son.

The Metropolitan Police Department is currently offering a reward of up to $25,000 to anyone that provides information which leads to the arrest and conviction of the person or persons responsible for the homicide. Anyone with information about this case is asked to call the police at 202-727-9099. Additionally, anonymous information may be submitted to the department’s TEXT TIP LINE by sending a text message to 50411.