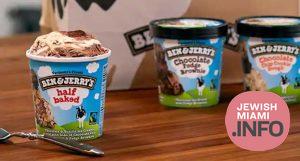 In a well received announcement Wednesday, Ben & Jerry’s parent company Unilever announced that it had closed on a deal that would allow the Israeli company selling Ben & Jerry’s Ice Cream in Israel to continue, even in Judea and Samaria.

Agudath Israel applauded Unilever’s announcement today that it has sold its Ben & Jerry’s business interests to its Israeli licensee which effectively ended the Ben & Jerry’s antisemitic BDS practices there.

“Agudath Israel’s position has always been that the BDS movement is a manifestation of animus against Jews as a people,” Agudah wrote in a press release. “We are on longstanding record as advocating for anti-BDS laws across the United States, and have defended their constitutionality in courts of law. Most recently, Agudath Israel filed a brief defending the constitutionality of Arkansas’ anti-BDS law. Last week, the 8th Circuit U.S. Court of Appeals upheld that position.”

Last summer, as part of its “social mission”, Ben & Jerry’s decided to refuse sale of its products in parts of Israel, including East Jerusalem. At that time, Agudath Israel and other groups called on Unilever and Ben & Jerry’s to reverse the boycott.

Ben & Jerry’s controversial move led to significant legal and financial woes for it and its parent company, including lost business interests in many states which divested their pension funds of Unilever.