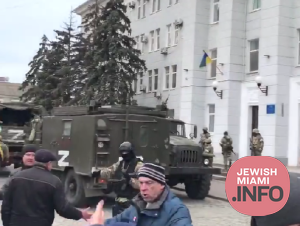 (UPDATED 10:01PM) Russian Advance Slows As Both Sides Sit Down For Peace Talks

10:01pm: Ukraine’s ambassador to U.S. says Russia used a vacuum bomb on Monday. A vacuum bomb is a type of explosive that uses oxygen from the surrounding air to generate a high-temperature explosion. In practice, the blast wave typically produced by these weapons lasts significantly longer than that of a conventional condensed explosive.

10:00pm: The International Criminal Court is “opening an investigation into the situation in Ukraine, as rapidly as possible,” the court’s chief prosecutor announces.

5:10pm: Want to get verified information on on equipment damage and loss in this war? https://www.oryxspioenkop.com/2022/02/attack-on-europe-documenting-equipment.html

5:05pm: All Russian ships are now banned from docking in British ports.

Growing signs #Putin has ordered a medieval siege of #Kyiv

Cut a city of millions off from food, fuel, power, communications & supplies & then bomb & starve the govt into submission

1:47pm: The Israeli Foreign Ministry confirms that a young Israeli citizen was killed in Ukraine while he was making his way to the border with Moldova.

1:46pm: Russian teams have been suspended from international soccer after the country’s invasion of Ukraine. (FIFA)

11:57am: A senior defense official revealed that “just under 75 percent of the combat power” Putin assembled ahead of the invasion is currently inside Ukraine. Last week, the US estimated Russia massed up to 190,000 troops along the border.

11:36am: According to initial reports, a Jewish person, possibly Israeli, was killed by Russian fire as he was trying to flee Kyiv, Ukraine with a group.

11:34am: Russian forces are shelling residential areas of Kharkiv with Grad missiles.

9:34am: Two small cities in southern Ukraine have fallen to the invading Russian forces.

Remember, thes numbers are coming from Ukraine, and are impossible to verify.

11:06pm: Analysis from Senator Marco Rubio – “This is the most dangerous moment in 60 years #Putin’s is facing a humiliating military fiasco & he has triggered extraordinary consequences on #Russia’s economy & people that will not be easy to reverse And his only options to reset this imbalance are catastrophic ones.”

10:49pm: Ukraine’s Interior Ministry says 352 Ukrainian civilians have been killed during Russia’s invasion, including 14 children. It says an additional 1,684 people, including 116 children, have been wounded.

The ministry’s statement Sunday does not give any information on casualties among Ukraine’s armed forces.

10:45pm: Belarus renounces it’s non-nuclear status after a referendum today, allowing the Russians to base nuclear weapons in the country.

4:01pm: New York Gov Kathy Hochul announced that the state will end and divest all investments in Russia.

3:58pm: Ukrainian Ministry of Health says 352 civilians, including 14 children, have died in the Russian attack on Ukraine so far.

2:58pm: FedEx and UPS have suspended shipments into Russia amid the country’s invasion of Ukraine.

2:57pm: The mayor of Kyiv says the city is now surrounded by Russian forces, making it impossible for citizens to evacuate.

12:27pm: Ukraine reports damage to two nuclear waste sites. According to initial reporting, there is no significant radiation leaks.

12:00pm: The official government account of Ukraine confirms that the sole An-225 Mriya, the world’s largest operational aircraft, has been destroyed by the Russians.

11:56am: The EU bans all “Russian-owned, Russian registered or Russian-controlled aircraft” from landing, taking off or flying over its airspace.

10:40am: Ukrainian and Russian officials will meet for talks at a venue on the Belarusian border with Ukraine, President Volodymyr Zelensky’s office said on Sunday.

9:20am: The Israeli government has published the following communication about a rescue of Israeli’s in Ukraine.

The Israeli embassy in Poland last night rescued 60 Israeli civilians through the Korczowa crossing in Poland in a rescue operation that lasted more than 12 hours.

The Israeli diplomats, from the Israeli embassies in Ukraine and Poland and recovering diplomats who came from the Foreign Ministry in Jerusalem and from Israeli missions in Europe, crossed the border four times throughout the night and rescued the Israelis including women, children and students who needed medical assistance.

The event was conducted by the Foreign Ministry Lt. Col., which was established in the border town of Peshmerga.

9:10am: In an unconfirmed report, claims were made that the Ukrainian military has “neutralized” the Chechen general, Magomed Tushayev. Apparently, he could have been killed near Kiev, in the area known as Hostome. Tushayev He was in charge of the 141 motorized regiment of the so-called Kadyrov guard: one of the most elite units in Chechnya and whose contingent would be made up of about 400 men.

9:00am: Intel and AMD announce they will stop supplying microchips to Russia.

8:00am: A recent order to Russian military leaders has sparked a warning from the US.

Marco Rubio posted that officers should “think very carefully before following the orders they recently received.”

“Putin is 2 years shy of the life expectancy of a Russian male and you will spend the rest of your lives evading an international tribunal for committing his crimes.”

7:00am: As per US Intelligence Chair Marco Rubio, we know what Putin’s plan was: