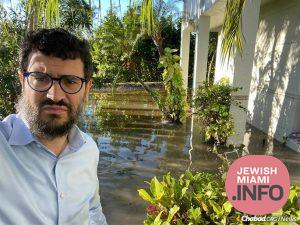 In one short, horrific moment last week, Sasha Greto lost her home and everything in it to Hurricane Ian. A violent storm surge submerged her neighborhood in Venice, Fla., and brought five feet of water into her house. There was no salvaging; the water didn’t have anywhere to go. Even four days later, on Sunday afternoon, it was still there.

Greto, a mother of two, was devastated about her home but when she looked around her neighborhood, all she saw were trapped people in need of help. “My neighborhood is full of children and elderly, and the police couldn’t get there yet. So we took our neighbor’s kayak and canoe, and went over to people who were really stuck and in danger, and brought them out by boat.”

On Sunday, Greto arrived at Chabad of Venice, where she works as a secretary, and found that its directors, Rabbi Sholom Ber and Chaya Rivkah Schmerling, had turned the center into a Hurricane Relief Headquarters. “Rabbi Schmerling had it all set up: An outdoor kitchen, truckloads of food and supplies, teams of volunteers. He had maps and routes for volunteers to get to families who were unaccounted for.”

In the four days since the hurricane decimated much of the state—killing at least 76 and leaving countless residents without homes, electricity or means of transportation—Chabad-Lubavitch emissaries throughout Florida, along with community members, friends and volunteers from around the state, have been knee-deep in rescue efforts, feeding thousands and delivering basic necessities to thousands of other people.

In Venice, Greto took 40 hot meals, bottles of water and baby formula from the Chabad center and went back to her neighborhood, and onto a boat. “I distributed it to people who were so grateful. The Chabad family is amazing, and I’m so lucky to be part of it.”

Asked how she found the strength to help others when she herself had lost everything, Greto simply replied: “It’s how I was raised. When people are in a time of need, people have to step up. There’s not much I can do for myself now, so I’m not going to just lie down and give up.”

‘Jewish, non-Jewish, everybody together’

She was not alone. Not long before Rosh Hashanah, but still before Hurricane Ian was a concern, Chabad of Venice had hosted a new event, calling for volunteers.

“We wanted to create leaders,” explained Rabbi Sholom Ber Schmerling. “The community needs volunteers to help people with so many different things. We invited the community to create a team of volunteers who would take initiative where needed, and it could not have come at a better time.”

Sixty people signed up, not knowing that their very first task was coming soon and would be monumental.

On Wednesday afternoon the hurricane hit, and Venice was in the area that was hit the worst. For three days, there was no cell service. Five days out and still no one has electricity. As soon as the storm left, Schmerling sent out volunteers to check on people. In some cases our volunteers were swimming to get to people, even just to bring them food and water.

With the new volunteer corps, Rabbi Schmerling quickly got organized and mapped out points of need. Chabad of Boca Raton came in with dozens of additional volunteers and tons of kosher food to prepare thousands of meals. Rabbis Yossi Dubrowsky and Pinny Backman from Chabad of Tampa brought another busload of volunteers for rescue efforts. Donations of food, toiletries and clothing began pouring in by the truckload.

By Sunday morning, Schmerling had an industrial sized generator to power the Chabad Center. “We now have 200 people here from the community—Jewish, non-Jewish, everybody together. Here, they can eat a fresh meal, get food and water, charge their phones and rest up in an air-conditioned building away from the oppressive Florida heat. We even have volunteers helping people with insurance claims.”

The First of Many Rescues

At 4 a.m. on Thursday, the phone of Rabbi Fishel Zaklos of Chabad of Naples rang. Edith Cohen, an 88-year-old community member, was on the line.

“I heard the banging all night, but I didn’t have electricity. I was very frightened, I opened my shutters and saw that a tree fell on my house. Hashem really saved my life; it narrowly missed my bedroom.”

It was no longer safe for Cohen to stay in her home. Rabbi Zaklos found a heroic community member who was able to reach her and bring her to safety.

“It’s unimaginable! I’ve been through many hurricanes, I’m 88 years old, and I’ve never seen anything like this,” related Cohen. “The rabbi quickly got me a place to stay, and food. I know he really cares about me, I’m very lucky to have the Chabad community.”

Cohen was only the first of many rescues. At daybreak, Rabbi Zaklos got straight to work with a team of Hatzalah Air volunteers. “We have many elderly people in the community. It’s concerning, very difficult to see. Most of the rescues have been for people aged 80 and up.”

One elderly woman was stuck on the second floor of her home for two days without food. The first floor of her home was completely flooded, and the police weren’t able to get to her neighborhood yet. Another family of six was found terrified, stuck in the dark with water rising in their home.

On Friday, through her spotty internet and phone connection, Paula Schaffer-Ellis managed to get through to Rabbi Zaklos. The rabbi had been looking for volunteers to deliver food to people who were trapped in their homes, or unaccounted for. “I saw that he was in need of volunteers at the Chabad Center, and I just said, please tell me what time to be there.”

Schaffer-Ellis brought her 16-year-old son David along to the Naples Chabad Center, where they met the rabbi. “It was right before Shabbat, and he was coordinating food deliveries, helping people in need, arranging people to evacuate flooded houses. Just being there with him—it was a blessing, especially for my son to see it.”

Zaklos told the duo about an elderly couple who were unaccounted for. The couple’s daughter had called Zaklos explaining that she lived in a different state but was deeply worried about her parents. She hadn’t heard from them since before the hurricane, and they were alone without electricity, phone service or enough food supplies to last. The elderly couple lived on the 18th floor of an apartment building, and with no operational elevator, they couldn’t leave.

Paula and David didn’t even hesitate. They took meals from the Chabad Center and headed over to the building. After climbing 18 flights of stairs, they found the apartment and knocked on the door. When the elderly couple opened the door, they were completely taken aback; even skeptical and worried. “All these years I’m not used to kindness like this,” the woman explained.

On the way back down the eighteen flights, David told his mother: “Mom, we always question what is happiness, I feel happy right now. For me this is happiness. Being able to help them—and I can’t wait to help more people.”

“David wants to be a doctor,” Paula explained. “He wants to help people. In that moment, I saw him doing what he loves, and knowing that he chose the right path just makes me so happy as a mom.”

As the groups come in and out to restock, they share horror stories, “trapped families who haven’t had food or drink in days,” one volunteer explained.

Rabbi Dubrawsky from Tampa found a Holocaust survivor who was trapped in her home after a tree fell on her doorway, leaving her no way to escape. His group of volunteers sawed and removed the tree, setting her free.

Another family was found imprisoned by electric wires. The electricity poles had fallen right around their home, and the combination of fallen wires and water made it extremely dangerous to approach. The Chabad volunteers threw meals, water and other food items to them, and reassured the family that they’ll keep coming until they can safely leave their home.

Similar rescues were, and still are, happening in other Chabad communities of Southwest Florida. In Cape Coral, Rabbi Yossi and Rivky Labkowski lost connection with many community members when not only did they lose power and phone service, but entire bridges collapsed, leaving neighborhoods completely inaccessible. The couple organized lists and estimated locations of stranded and unaccounted for people, and continue to work closely with search and rescue teams.

“Tonight, let’s come together for a really great kosher dinner,” Rabbi Fishel and Etti Zaklos wrote on Facebook. “Not because of what we don’t have but because of what we do have. We are blessed to have an incredible community of people who know how to help, lift and love on ourselves and our neighbors when we need it most.”

The Sunday-night dinner came after a community barbecue on Thursday, and individual Shabbat meals delivered on Friday. On Monday morning, a kosher falafel truck is expected to arrive in the Naples community; in the evening, a kosher pizza truck will join in.

In Venice, the community will be welcoming an RV organized by Chabad of Uptown Minneapolis, which will deliver meals, and also welcome people in to enjoy air-conditioning and do a mitzvah.

In Cape Coral, Rabbi Yossi and Rivky Labkowski managed to host hundreds of community members for Shabbat meals, despite themselves having no running water, power or phone service. They continue to provide food, water and other necessities, including generators, to their community, and now need to think of the next big thing.

“We’re working on getting Chabad ready for Yom Kippur without power. It may take months for power to get restored.”

Donations to Chabad of Venice relief efforts can be made here.

Donations to Chabad of Naples relief efforts can be made here.