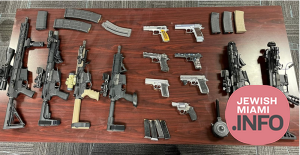 A ShotSpotter alert in unincorporated Central Broward on New Year’s Eve led to the seizure of 13 firearms and one arrest.

Broward Sheriff’s Office deputies in the Central Broward District responded to a home in the 1200 block of Northwest 30th Avenue around 8:40 p.m. that Friday. Once at the residence, deputies heard a barrage of rapid gunfire and took cover. Shortly after, deputies heard another barrage of rounds. Deputies established a perimeter around the residence, called in Aviation and K-9 units for assistance, ordered the occupants of the home outside and secured a search warrant for the home.

Deputies searched the home along with investigators from the Bureau of Alcohol, Tobacco, Firearms and Explosives. The search resulted in deputies seizing 13 firearms, including two short barrel rifles. Deputies also seized hundreds of rounds of ammunition.

“This case shows why ShotSpotter is such an invaluable investigative tool,” Broward Sheriff Gregory Tony said. “In this case, as in many others, no one in this neighborhood called 911 to report the gunfire. The ShotSpotter alert allowed deputies to respond to this scene quickly, understand the dangers involved and make an arrest, all while removing a significant number of weapons and ammunition from the streets.”

The owner of the weapons, Willie Pickett, was arrested on two counts of possession of a short barrel rifle.

No one was reported injured in the gunfire.