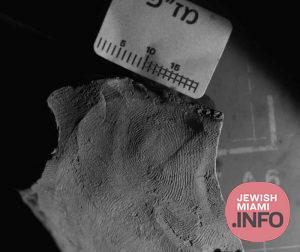 It was just another quiet day in the Motza neighborhood near Jerusalem, when a squad of police cars pulled over at an ancient dig site. In fact, it looked like a 1500-year-old crime scene!

In 2019, an excavation led by Israel Antiquities Authority archaeologists Dr. Uzi Ad and Dr. Anna Eirich uncovered an ancient pottery kiln in Motza, near Jerusalem. Broken clay oil lamps found scattered all around the kiln dated it to the Byzantine period, about 1500 years ago. Dr. Shulamit Terem, a ceramic specialist, joined Ad and Eirich at the site to further the research.

Terem observed that several clay oil lamps were decorated with palm trees and the menorah on the exterior. The even more astonishing “wow factor” were the fingerprints imprinted on the clay on the interior of the lamp sherds. The exciting discovery led Terem to turn to the Division of Identification and Forensic Science of the Israel Police to further the investigation. Ido Hefetz, Finger Comparison Expert with the Israel Police examined over 230 pottery sherds that were scanned for fingerprints at the division headquarters. 94 of these were so clear that the detectives created 3D simulations, and collected details about the owners of the fingerprints, including their age and gender, and possibly their profession.

These findings will help the IAA gain more knowledge about the potters and the communities in the area. These discoveries teach us about the people behind the artifacts. In this case, the Division of Identification and Forensic Science and the Israel Antiquities Authority worked together to reconstruct a fascinating piece of history.