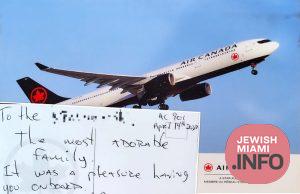 A Hand Written Letter From Air Canada To A Jewish Family

In a world where negative media coverage far outstrips the good, Lufthansa’s antisemitic debacle became front-page news across the world. But did you hear about this incident that also took place on an airline?

A Jewish family flying on Air Canada found an entirely opposite reaction from the plane’s crew, all because their children acted “adorable”.

In conversation with CrownHeights.info, the family said that they had not done anything intentionally to attract the attention of the flight crew, rather they had simply acted as any grateful passenger should. But the response they received was not as they had anticipated.

Seeing their well-behaved children, the flight attendants plied the family with extra snacks, inviting them to meet the pilot after the flight, and even wrote a note showing their gratitude.

The note, dated April 14th and signed by the stewardesses, was handwritten “To the most adorable family”, telling them to “Keep dreaming” and that “The Sky is the Limit”.

Such positive interactions far outstrip the negative stories for their meaningfulness and lasting impact, although they do make for less bombastic news articles.

To the flight crew on this Air Canada flight, we salute you. Keep up the great work.