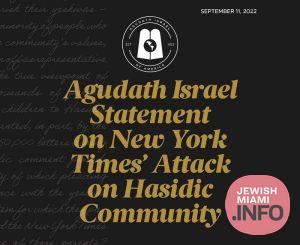 The following statement was released by Agudas Israel of America in response to an article published in the New York Times.

The article is riddled with bias, ignoring the vast majority of Hasidic parents – those who cherish their yeshivas – instead citing a minority of people who have rejected the community’s values, and passing them off as representative of the whole. The true viewpoint of the tens of thousands of parents who send their children to Hasidic schools is represented, in part, by the recent historic 350,000 letters during the state’s public comment period, the vast majority of which pleading for no interference with the yeshiva educational system for which they pay and value. Could the New York Times not speak to one of those parents?

In this article, everything beautiful is turned ugly. While challenging college classes are lauded in society, our disciplined, rigorous, and intellectually challenging Torah studies are denigrated. Disgusting innuendo abounds. The supposed poverty data, which form the foundation of much of the piece, have been debunked so many times as to become tiresome. And then there are the outright falsehoods, too many to list, being cataloged now by writers, fact-checkers, and defamation lawyers.

There are certainly some who have had poor experiences in a yeshiva. But the New York Times has written a piece that could find almost nothing positive in a community that has raised generations of successful entrepreneurs, professionals, and blue-collar workers. Generations of successful human beings – even if success is defined in purely material terms.

Hasidic communities are models of safety and commerce, with low crime, suicide, and drug abuse rates. Our communities are focused on pursuits of knowledge, family values, kindness, and service to G-d and to others.

We await, in vain, for a New York Times article on that.