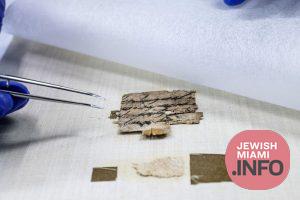 A rare document was returned to Israel in a joint intelligence operation by the Israel Antiquities Authority Robbery Prevention Unit and Professor Shmuel Ahituv, recipient of the Israel Prize for Biblical Studies, together with the Ministry of Culture and Sport, and the Ministry of Jerusalem Affairs and Heritage. The document opens with the words: “To Ishmael send….” Whilst the text does not refer to Hagar’s son, it is a fragment of a letter containing instructions to the recipient. Based on the script, it is proposed to date the ‘Ishmael Papyrus’ to the seventh or sixth centuries BCE, joining only two other documents written on organic materials from this period, owned by the State of Israel, and located in the Collections of the National Treasuries. All three papyri come from the Judean Desert, where the dry climate enables the preservation of the papyri.

In order to confirm that the document was genuine, a small sample was radiometrically dated in the Weizmann Institute in Rehovot. The examination furnished a date similar to that provided by the paleographic examination, thus consolidating the dating towards the end of the First Temple period.

According to Dr. Eitan Klein, vice-director of the Antiquities Robbery Prevention Unit, “Returning this document to Israel is part of our ongoing efforts […] to protect and preserve the cultural heritage of the State of Israel, a heritage that belongs to all its citizens.”

Hili Tropper, Minister of Culture and Sport: “The Israel Antiquities Authority, together with the Ministry of Culture and Sport and the Ministry of Jerusalem Affairs and Heritage, initiates the discovery and recovery of impressive antiquities, and continues to surprise us with their success in locating lost archaeological treasures. The Antiquities Robbery Prevention Unit of the Israel Antiquities Authority acts vigorously to uproot the phenomenon of antiquity looting, with the aim that the entire population can appreciate the national heritage and deepen our roots.”