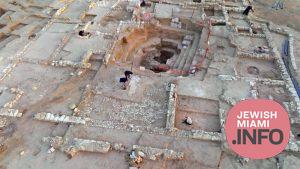 Ancient Mansion Uncovered In the Sands of Eretz Yisroel

A surprise find awaited the Israel Antiquities Authority archaeologists who carried out the excavations in the context of the Israeli government’s plan to build a new neighborhood in the Bedouin town of Rahat in the Negev.

The archaeologists discovered a building with a central courtyard overlying a unique vaulted complex and a three-meter-deep rock-hewn water cistern, dated to the Early Islamic period (8th-9th centuries CE). This building is a 1,200-year-old luxurious rural estate, the first of its kind uncovered in the Negev. The villa comprised four wings with rooms to serve the needs of the residents. In one wing, there was a hall paved with a marble and stone floor and walls decorated with frescoes (wall paintings on damp plaster). The extant small fresco fragments were finely colored in red, yellow, blue, and black. Other rooms in the building had plaster floors, and in other rooms, there were large ovens and fragments of delicate decorated glass serving dishes.

“The luxurious estate and the unique impressive underground vaults are evidence of the owners’ means. Their high status and wealth allowed them to build a luxurious mansion that served as a residence and for entertaining”, say the excavation directors – Oren Shmueli, Dr. Elena Kogan-Zehavi and Dr. Noé D. Michael.

According to Eli Eskosido, Director of the Israel Antiquities Authority “By good chance, and much to the local population’s interest and excitement, the building remains uncovered in the area planned for expanding the town of Rahat date to the Early Islamic period.

The Israel Antiquities Authority and the Authority for the Development and Settlement of the Bedouin are planning together to conserve and exhibit the finds to the general public.”