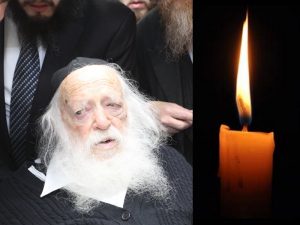 With great sadness, the Jewish world mourns the passing of Hagaon Harav Chaim Kanievsky Zatzal, a leader of the Jewish community who lived in Eretz Yisroel.

Emergency crews from Hatzalah rushed to the home of the Gaon after he was reported to have collapsed. His death was announced after attempts at resuscitation failed.