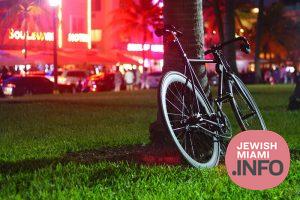 The City of Boca Raton once again was awarded a Bronze Bicycle Friendly Community Award by the League of American Bicyclists. One of 55 destinations nationwide to receive the award designation, the City previously received this recognition in 2018 – and is proud to have held this designation since 2003. The designation is valid for four years, through 2025.

City leaders and staff have long been committed to promoting and encouraging bicycling as a safe, economical, environmentally friendly, and health-conscious mode of transportation and recreation. With over 84 miles of bike lanes, as well as shared-use paths and trails, the City’s bicycle network has been enhanced by successful projects such as the A1A bicycle lanes, the Patch Reef Trail, and the El-Rio Shared Use Trail. On the El-Rio Trail, recent upgrades surrounding the I-95 interchange construction near Yamato Road allow bike riders and pedestrians to travel safely through an underpass that connects the north and south ends of the trail. The City has also improved some centrally located public areas and parks with additional bike racks and bike repair stations.

Boca Raton’s dedication to being a bike friendly community is supported by the Citizens’ Pedestrian & Bikeway Advisory Board. The seven-member board works to increase public awareness of bicyclists and other pedestrian users of pathways and roadways and brings initiatives to the City Council that are designed to improve and enhance access to existing bike related facilities and programs. The public is welcome to attend and provide input on pedestrian and bicycling amenities within Boca Raton at the Advisory Board’s meetings – held at 6:00pm on the second Monday of every month at the Community Center Annex, 260 Crawford Blvd.

The award is presented by the League of American Bicyclists. The organization leads a national movement to create a Bicycle Friendly AmericaSM  for everyone – through education, advocacy, and promotion. Through its Bicycle Friendly Community Award program, the League recognizes communities, businesses and universities across the nation that make bicycling a real transportation and recreation option for everyone.  To date, there are a total of 496 bicycle friendly communities across all 50 states and the District of Columbia.

To read more about the City’s award, visit: https://bikeleague.org/bfa/awards.