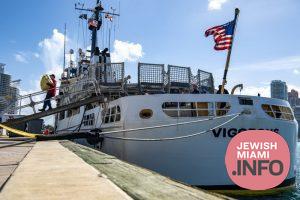 The crew of the Coast Guard Cutter Vigorous offloaded approximately 22 pounds of cocaine and 1,256 pounds of marijuana, worth an estimated $3 million, Tuesday at Base Miami Beach.

“Vigorous is glad to have been able to make an important contribution to the Coast Guard’s counterdrug mission,” said Cmdr. Ryan A. Waters, commanding officer of Vigorous. “I’m incredibly proud of the hardworking Vigorous crew’s proficiency teamwork and devotion to duty that enabled the detection, interdiction and boarding of a vessel suspected of drug smuggling.”

The fight against drug cartels in the Caribbean Sea and Eastern Pacific Ocean, and the transnational criminal organizations they are associated with, requires a unity of effort in all phases; from detection and monitoring to interdiction and apprehension, and on to criminal prosecutions by international partners and U.S. Attorneys’ Offices in districts across the nation.

Cutter Vigorous, a 210-foot Reliance-class medium endurance cutter, was commissioned in May 1969 and is homeported in Virginia Beach, Virginia. The Vigorous generally deploys 185 days a year for patrols lasting 45 to 60 days to a variety of operating areas, extending from the Gulf of Maine to the Caribbean Sea, the Gulf of Mexico and the Eastern Pacific Ocean. The Vigorous’ primary mission areas include homeland security, law enforcement, counterdrug operations, search and rescue, migrant operations, and fisheries enforcement.