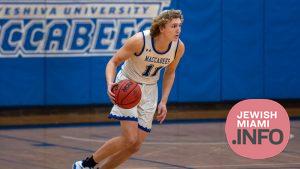 It’s a historic moment in the history of the NBA.

Yeshiva University star basketball player Ryan Turell was drafted by Motor City Cruise, the G League affiliate of the Detroit Pistons as the No. 27 overall pick in the G League 2022 draft. He is the first ever Orthodox Jew drafted into an NBA League.

According to ESPN, Turell averaged 24.0 points per game in four seasons, finishing his college career with 2,158 points despite having two seasons shortened by COVID-19.