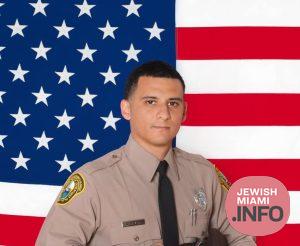 Flags At Half Staff In Honor Of Detective Cesar “Echy” Echaverry

Governor Ron DeSantis announced a Memorandum for Wednesday, lowering the state flag to half staff in honor of Detective Cesar “Echy” Echaverry, a Miami-Dade Police Officer killed in the line of duty.

“On Wednesday, August 17, 2022, Detective Cesar “Echy” Echaverry passed from critical injuries sustained in the line of duty on August 15, 2022,” the Memorandum reads. “He served the community as a law enforcement officer for the last five years in Miami-Dade County. Echaverry was a member of the Miami-Dade Police Department’s Robbery Intervention Detail unit, working specifically in crime-ridden neighborhoods. Detective Echaverry will be remembered for his selfless courage to protect the lives of others at the cost of his own.”