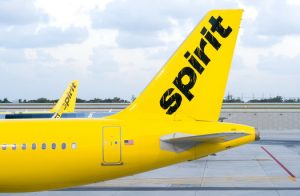 Frontier and Spirit announced today that they plan on merging to create the 5th largest US airline. Frontier will control 51.5% of the combined company. The airlines hope to complete the merger in the second half of this year.

The ultra low cost carriers are famous for their poor customer service and customer unfriendly policies.

Yes, their flights will often get you to where you want to go. But when things go bad, they go spectacularly bad. If things go wrong on United you can get moved to American or Delta. But when you book travel on an ultra low cost carrier, they won’t rebook you on another airline.

Just last week, Frontier announced they would match Spirit in only allowing 40 pound checked bags, even after you pay for their pricey checked luggage.

The ultra low cost carriers have created a culture of racing to the bottom that other airlines have felt the need to copy, which has spawned awful products like basic economy.

Only Southwest seems immune to that race to the bottom, while once proud airlines like JetBlue go down a rabbit hole of product devaluations to the point that they no longer resemble anything close to what they were originally created to do. No wonder David Neeleman is trying again.

JetBlue was just ranked by the WSJ as the worst airline in the US by overall 2021 performance at number 9, while Frontier and Spirit came in at number 6 and 8. Frontier was tied with American at number 6. There is a noticeable difference in operational performance between the top 4 and the bottom 5:

The merger will have to clear regulatory hurdles, but given that Delta, American, United, Southwest, and Alaska have all gone through recent mergers, it would be surprising if the merger was rejected. Then again, regulators may feel that they have approved too many airline mergers, which have caused higher prices and less meaningful market competition. The DOJ under the Biden administration has also acted more aggressively against airline partnerships, challenging previous approval for American-JetBlue Northeast cooperation, so we’ll have to see if they will challenge future mergers as well.

On paper, the merger does make sense as the airlines have similar fleet compositions, will create economies of scale, and will allow the airlines to stop competing with each other and focus on attacking the major network carriers.

The merger would leave JetBlue in 7th place and the smallest of the major US airlines, which will further hinder their ability to compete. If a Spirit-Frontier merger is approved, it wouldn’t surprise me to see JetBlue merge or get bought out by another airline. I’d say that United and American would both be prime candidates to buy and merge with JetBlue.

What do you think of the merger news?