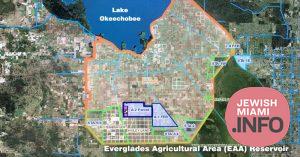 “The EAA Reservoir project is the crown jewel of Everglades restoration, providing relief from harmful discharges to the estuaries and sending more clean water south to the Everglades,” said Governor Ron DeSantis. “Advancing the state’s portion of this project is our number one priority, but the federal government has stalled, most recently failing to dedicate a single cent from its infrastructure package to its portion of this project. The Biden Administration must reverse course and dedicate the funds necessary to timely advance their portion of this important project. Florida is doing its part and the Biden administration needs to follow the path blazed by the Trump administration and provide the promised federal support.”

Everglades restoration is a 50/50 partnership between the state and federal government, but the federal government has long lagged behind the state’s investments in projects. The EAA Reservoir Project is one of the most important Everglades restoration projects for reducing harmful discharges to the estuaries and sending more clean water south to the Everglades. Governor DeSantis expedited this critical Everglades project on his second day in office with the signing of Executive Order 19-12. Recently, the Biden Administration announced a $1.1 billion one-time investment for Everglades restoration, but the funding was dedicated to other projects that, while part of the important work to restore the Everglades, will not help to meaningfully reduce harmful discharges from Lake Okeechobee.

The EAA Reservoir Project is a joint Everglades restoration project between the South Florida Water Management District and the U.S. Army Corps of Engineers. Under the leadership of Governor DeSantis, Florida continues to take the lead in Everglades restoration. The South Florida Water Management District began building the water-cleansing marsh called a Stormwater Treatment Area in 2020.