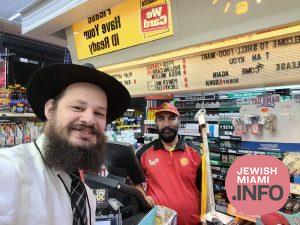 Rabbi Shlomo Litvin, the Shliach in Bluegrass, Kentucky, was in the middle of Ohio and out of gas. The story that comes after shows the power of being a “Dugma Chaya”, and how that can effect some ones perception for many years to come.

“Driving home, in the middle of Ohio, I realized I was out of gas and had somehow misplaced my wallet,” Rabbi Litvin wrote on his social media. “I pulled into a Shell hoping the pumps took Google pay. They didn’t.”

When seemingly out of options, an employee at the gas station came out and approached Rabbi Litvin, telling him to fill up – on the honor system – and then come in after to arrange payment.

After arranging payment with Rabb Litvin, the employee said something that shows the power of being a “Digma Chaya”.

He said, “Most people we make pay first, because they could run away, but I knew you wouldn’t do that. I know your community, because I used to live in Boro Park.”

All it takes to change the perception of the people around you is to be a Dugma Chaya, and it helps to also live in Boro Park.