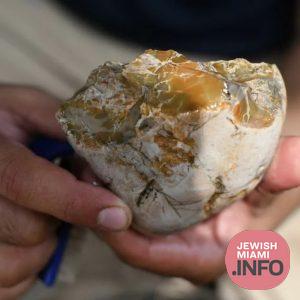 It is not an illusion- gigantic elephants roamed the prehistoric landscape of the coastal plain of Israel half a million years ago, as attested by an exceptionally well-preserved ancient elephant tusk, that is being uncovered near Kibbutz Revadim in southern Israel.

Dr. Eitan Mor, a biologist from Jerusalem, was the first to discover the fossil; He visited the area out of curiosity after reading about prehistoric elephants. Mor says, “To my surprise, I spotted something that looked like a large animal bone peeping out of the ground. When I looked closer, I realized that it was ‘the real thing’, so I rushed to report it to the Israel Antiquities Authority”.

Our archaeologists arrived at the site following Mor’s report and could hardly believe their eyes. “From our previous archaeological excavations at Revadim, we knew that the site was settled in the Late Lower Paleolithic period, as stone and flint tools, as well as animal bone remains (including elephants) were retrieved. but finding this half-a-million-year-old complete elephant tusk in such good condition is something else! This is the largest complete fossil tusk ever found at a prehistoric site in Israel or the Near East,” says Israel Antiquities Authority prehistorian Avi Levy, the director of the excavation.

And so, a joint two-week excavation named “Operation Elephant” began: specialists from the Israel Antiquities Authority, the Dan David Center for Human Evolution and Biohistory at Tel Aviv University and Ben-Gurion University of the Negev, have exposed the ancient elephant tusk that was concealed in the ground for hundreds of thousands of years.

“The tusk belongs to the straight-tusked elephant species, known from only a few sites. The species apparently appeared in our region about 800,000 years ago, and by 400,000 years ago it became extinct. It was a gigantic elephant, larger than the present-day African elephant,” points out Israel Antiquities Authority Archaeozoologist Dr. Lee Perry-Gal.

“In the archaeological excavations that we conducted here several years ago, we found some elephant bones (skull parts, ribs and teeth), and flint artifacts, such as flake tools, hand-axes and chopping tools used in processing animal flesh,” report Prof. Ofer Marder of Ben-Gurion University and Dr. Ianir Milevski, head of the Israel Antiquities Authority Prehistory Branch. “The discovery of the tusk detached from the skull and the rest of the body, raises questions: Is the tusk the remains of a hunted elephant, or was it collected by the local prehistoric inhabitants? Did the tusk have social or spiritual significance?”

The extraction of the large tusk from the site sediments is a great challenge, even for experienced archaeologists and conservators. “The fossilized tusk is extremely fragile, and it is likely to disintegrate when exposed to the air and sunlight, as well as to human touch,” explains Prof. Israel Hershkovitz from the Dan David Center for Human Evolution and Biohistory at Tel Aviv University. “The tusk was subjected to an initial conservation treatment when it was first discovered. Now we are excavating it within its archaeological context, before transferring it to the Israel Antiquities Authority Conservation Laboratory, where it will be studied and conserved.”

When the conservation process is completed, we plan to exhibit the tusk to the public in the IAA permanent exhibition hall at the new Jay and Jeanie Schottenstein National Campus for the Archaeology of Israel in Jerusalem.