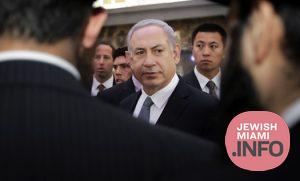 Prime Minister Yair Lapid congratulated Netanyahu and instructed his staff to prepare an organized transition of power, his office said.