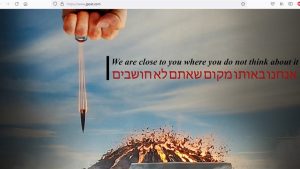 The website of the Jerusalem Post was hacked on Sunday night and replaced with an image of a rocket coming out of a ring on a person’s finger.

Next to the image was the text, “We are close to you where you do not think about it” and a similar text in Hebrew.