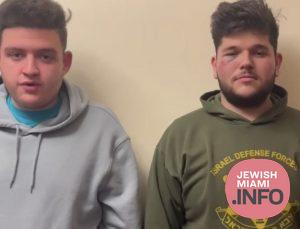 A Jewish man was allegedly attacked Bay Ridge by an assailant incensed over his Israel Defense Forces sweatshirt.

Blake Zavadsky and his friend Ilan Kaganovich, both 21, were outside the Foot Locker on 86th Street in Bay Ridge, just before before the store opened at 11 a.m. Sunday, when they were approached by two men who allegedly called them “dirty Jews.”

The men allegedly asked, “Why are you in our neighborhood?” Zavadsky and Kaganovich said, in a video describing the incident, publicized by Councilwoman Inna Vernikov, whom the victims reached out to following the incident.

One of the men threatened Zavadsky that “he has five seconds to take off the [IDF] hoodie, otherwise they will punch him,” Kaganovich recalled.

When Zavadsky refused to take off the hoodie, one of the men punched him twice under his right eye, and poured iced coffee on his sweatshirt. The other man warned Kaganovich that if he tried to defend his friend, he would be hit, too.

The incident was first reported by the New York Post.

“These boys’ families [left] the former Soviet Union precisely because of incidents such as this one,” said Vernikov, herself a Ukrainian immigrant. “We [came] to this country for freedom of religion, and here we go again, getting beaten up in broad daylight in the middle of Brooklyn, New York, in the United States of America, in 2021.”

Governor Kathy Hochul tweeted about the incident, “This is abhorrent and unacceptable. Antisemitism & all hate has no home in New York.”

The assailant l is described as a male, light complexion, 5’10” and last seen wearing dark colored clothing. The incident is being investigated by the NYPD’s Hate Crimes Task Force.