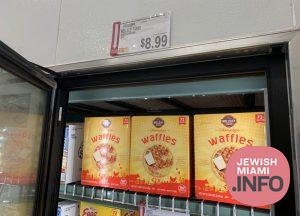 The Orthodox Union (OU) Kosher Certification has released a Kashrus Alert regarding Wellsley Farms Waffles, which were mistakenly mislabeled with a plain OU instead of OU-Dairy.

The Orthodox Union certifies Wellsley Farms Blueberry Waffles and Chocolate Waffles as OU D – Dairy products. Some labels were printed with a plain OU mark, without the D – Dairy designation. Corrective actions are being implemented.

The brand is sold in BJ’s Wholesale, based in Westborough MA.