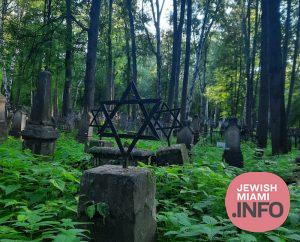 When community leader, Rebbetzin Sarah Deitch, took it upon herself to lead guided tours of the ancient Jewish Cemetery, she didn’t expect it to lead to an exciting historical discovery.

The Russian city of Perm, located near the Oral Mountains on the banks of the Kama River, boasts an ancient Jewish Cemetery – dating from 1850 to 1950 – with Hebrew inscriptions on the gravestones, bearing testimony to the vibrant Jewish life the district once knew.

Adjacent to the Jewish cemetery, there is a successful modern art museum, that initiated an exhibit displaying interesting information about the city’s Jewish life and its cemetery. The view of the cemetery from the museum intrigued them over the years and encouraged them to explore “what happened there.” and led them to the project.

After successfully running the exhibition last year, the museum decided to upgrade the experience and conduct tours of the cemetery for the city’s residents. The museum turned to the Jewish community, and Rebbitzin Sarah Deitch, a prominent community activist, took up the challenge.

“I always loved history, and the topic of Perm’s Jewish past has fascinated me for years,“ says Mrs. Deitch. “I began guiding groups, after conducting a thorough study of the area. Our community, led by my husband the Chief Rabbi and Chabad emissary of Perm Zalmen Deitch together with Mr. Meir Goldberg, has been nourishing and cleaning the place for years, since 2006 every Spring. Within three years, the community took care of all the fallen tombs, listed the names of the deceased and numbered them, cleaned the entire cemetery, and made all the information available online.”

Sara’s research led her to exciting revelations. “In order to learn more about the Jews buried in the cemetery, I also turned to some of their relatives and learned that the first Jewish community consisted of Jewish soldiers forcibly recruited in childhood to the Tzar’s army – they were known as Cantonists. I discovered that one of the harshest schools for the kidnapped Jewish children was just outside Perm. Children who wouldn’t be convinced to convert to Christianity and betray Judaism, were sent from all across the Russian Federation to this school.”

“After serving in the army for 25 years, the soldiers were permitted to live where they served, even beyond the Pale of Settlement, and that’s how the community was established. This led me to conduct further research that led to Jewish news articles in online archives describing Perm’s community life in those days.”

“We discovered the Jewish Cantonist community was full of strong believers, many of whom never managed to wed – due to their age and difficult lives – and lived in poverty. This led to the exciting story of the great grandfather of one of the ladies in our community, who did manage to get married. During the guided tour, I exposed the residents to his amazing story of heroism.”

Years later, the Jewish community grew as doctors and businessmen were allowed to settle due to their special status, resulting in interesting developments that affected the community and brought unity between the establishers and newcomers. Within time, the community grew scholars, rabbis, educators, and ran a thriving Jewish life. “My goal is for people to learn from the past and discover the importance of being connected to their roots and heritage,” Mrs. Deitch concludes.