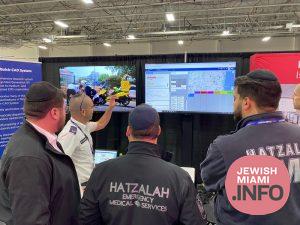 Versions of the system already dispatch Magen David Adom and the Israel Fire and Rescue Service, as well as the Philippine Red Cross. The software also serves as an interface that connects the Israel Police and the Israel Defense Forces to Israel’s other emergency services. Hatzalah South Florida, which serves Palm Beach, Broward, and Miami-Dade counties in the Sunshine State, is also adopting a version of the software optimized for medium- and smaller-sized EMS organizations for its dispatch operations.

“Magen David Adom’s dispatch system is unparalleled in terms of its use of artificial intelligence and machine learning to be able to direct lifesaving resources — EMTs, paramedics, ambulances, and other equipment — to the scene of an emergency,” said Ido Rosenblat, chief information officer for Magen David Adom and himself a Medevac paramedic who oversees dispatch technology at MDA. “The technology is too good not to share with other lifesaving organizations

“We value our relationships with the Hatzalah movement in Israel and America and look forward to providing our lifesaving technology wherever needed. It was built out of necessity, after learning harsh lessons about responding to terrorist and rocket attacks and to emergencies during war,” said Rosenblat.

In Israel, callers to MDA’s 101 hotline are connected to a medical professional, either an EMT or paramedic, within four seconds, who can assess the emergency through the conversation with the caller or by the system’s ability to provide a live video stream of the scene. The system’s technology enables MDA to instantly geolocate the caller and simultaneously dispatch the nearest ambulance and seven nearest first responders to the scene, irrespective of whether they are from Magen David Adom or any Hatzalah group.

At the expo, Uri Shacham, Magen David Adom’s chief of staff, met with Rabbi Hershel Weber, who started the worldwide Hatzalah movement in the 1960s in Williamsburg, Brooklyn.

“It was a profound privilege to meet with the legendary Rabbi Hershel Weber, the man who inspired the concept of Hatzalah worldwide,” Shacham said.

“From the simple idea of volunteers saving lives in Williamsburg, Hatzalah has become a global movement with chapters across America, Israel, and around the world. Magen David Adom has partnered with Hatzalah to train volunteers and, in turn, has been strengthened by those volunteers flying to Israel to assist during times of war and national emergency. We are one people with one mission: to save lives.”