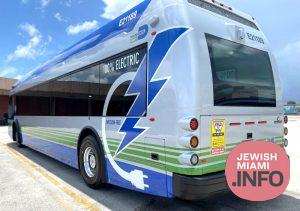 This week, the State of Florida announced a $19.8 million investment in Miami-Dade County for the purchase of 63 electric buses. Through a settlement with Volkswagen, the Florida Department of Environmental Protection (DEP) awarded more than $68 million to purchase 227 electric transit buses in 13 counties statewide, including $19.8 for Miami-Dade County – the largest award recipient of the counties.

Miami-Dade County’s Department of Transportation and Public Works (DTPW) applied for the funds in February 2022 and will utilize the settlement money to purchase 60-foot battery-powered electric buses to provide Bus Rapid Transit (BRT) service on the South Dade TransitWay, one of the Strategic Miami Area Rapid Transit (SMART) Program corridors currently under construction, and other bus routes throughout the County.

“This investment will be a game changer in our efforts to build a healthier, more resilient and future-ready Miami-Dade County,” said Miami-Dade County Mayor Daniella Levine Cava. “I am grateful for DTPW’s tireless work in securing transit funding for our county, and the Florida Department of Environmental Protection as well as the Florida Department of Transportation for helping us achieve our goal of growing our fleet of state-of-the-art battery-electric vehicles and become an example for the entire nation.”

The Electric Transit Bus Grant program funds awarded by the state will build on the county’s commitment to transportation electrification by expanding its electric Metrobus fleet. DTPW has already received the first vehicles of a total of 75 40-foot battery-powered electric buses manufactured by Proterra.

Upon the full delivery of the 75 vehicles, DTPW will run one of the largest fleets of 40-foot electric buses in the United States. Additionally, the department is working to procure 100 60-foot electric buses for the South Dade TransitWay and other bus routes. The state’s settlement funds will help purchase these 100 vehicles.

“This is a major step forward in our commitment to the county’s Climate Action Strategy to reduce emissions and electrify our fleet,” said DTPW Director and CEO Eulois Cleckley. “With this funding source, we will continue to lead the way towards having the largest sustainable transportation fleet in Florida and one of the largest in the nation.”

The transition to electric buses is an effective way to reduce harmful emissions, especially in highly populated areas where vehicles are the largest contributor of air pollution. Battery-electric buses emit no tailpipe pollution, saving approximately 230,000 pounds of greenhouse gases annually when replacing a diesel bus.